Confirming the I2S pins on Raspberry Pi 3 model B?

I'm having trouble confirming what are the pins used for I2S on Raspberry Pi 3 model B.

For older boards, RPi Low-level peripherals - eLinux.org ( via Can I get audio input through the GPIO ) notes:

P1 Header pinout, bottom row
It is also possible to reconfigure GPIO connector pins P1-12 and 13 (chipset GPIO 18 and 21) to provide an I2S (a hardware modification may be required[16]) or PCM interface.[17] However, PCM_FS and PCM_DIN (chipset pins 19 and 20) are needed for I2S or PCM.

P5 Header pinout, bottom row (for the older ones, without 40-pin J8)
The new header can provide a second I²C channel (SDA + SCL) and handshake lines for the existing UART (TxD and RxD), or it can be used for an I2S (audio codec chip) interface using the PCM signals CLK, FS (Frame Sync), Din and Dout.

But then, I2S is not mentioned in the Model A+, B+ and B2 section on the same page, where the 40-pin header connector is featured (which is apparently the same as the J8 connector in the Raspberry Pi 3 model B). 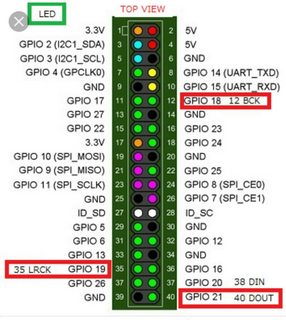 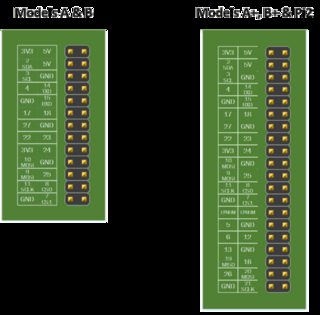 The Pi4J Project - Pin Numbering - Raspberry Pi 3 Model B has a pinout image that mentions:

Apparently, it mentions the PCM functions of the pins (instead of their I2S roles) - but then, the GPIO numbering is totally different from the previous two examples? Here is its diagram: 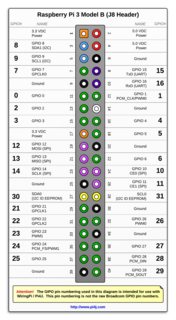 On this eLinux pinout, no I2S/PCM functionality is mentioned, but instead: 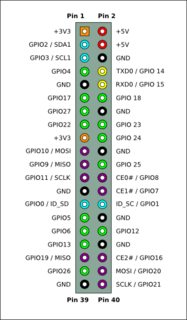 Other pinouts, like https://www.element14.com/community/docs/DOC-73950/l/raspberry-pi-3-model-b-gpio-40-pin-block-pinout or https://www.jameco.com/Jameco/workshop/circuitnotes/raspberry-pi-circuit-note.html don't even mention this alternative functionality - and apparently, I cannot find such a pinout diagram on the official site (apart from https://www.raspberrypi.org/documentation/usage/gpio-plus-and-raspi2/README.md which doesn't list any pin names/functions)

So, my questions are:

The GPIO you want are

No others are accessible from the Pi3B expansion header.

Not the answer you're looking for? Browse other questions tagged pi-3 i2s or ask your own question.

2
How to output all audio on the I2S interface and audiojack by default?
0
Help reading audio data from I2S microphones
2
Full duplex audio over i2s (Adafruit MEMS + DAC)
0
Need a board that have two I2S interfaces
0
I2S data stream format
4
How to use Rpi python to control PCM1802 24-bit HiFi stereo ADC and MAX4466 microphone amplifier
0
PCM1808 I2S arecord gets1153x too much data