I am investigating an idea for a little project where I want to run a Raspberry Pi in the bathroom/kitchen.

I'm looking into getting a Raspberry Pi case and touch screen, and will need microphone and speakers.

There's a couple of questions I have regarding this.

First of all, is there a waterproof/water resistant case/touchscreen for the raspberry pi. I can't seem to find that specifically says its water resistant, but I'm not planning on running under water, so it only potentially going to get affected by steam. I found https://www.amazon.co.uk/gp/product/B01M0AT5O5/ref=ox_sc_act_title_3?smid=A07590992ZJ1D7QSMML32&psc=1 as a case to use, but not sure if this will survive steamy rooms.

The other problem, is if it is in the bathroom, I won't have a wall socket I can use to plug in the raspberry pi. Is there a battery power pack that can be used to power to power the raspberry pi. It would need to be powered permanently as the project would involve an always listening microphone input. So I'm looking for something that can power it enough that it would be able to keep the Pi running/listening and only require maybe charging every couple of days (obviously the longer the power packs lasts the better).

Is what I am wanting to do possible?

Especially since you want to inlcude a battery, I suggest you get a bigger case without any pre-made openings, and only make the openings you will need. This way you will have plenty of space to arrange your components, and limit the possible steam intake to a minimum.

For example, I have once used a case similar to this one: 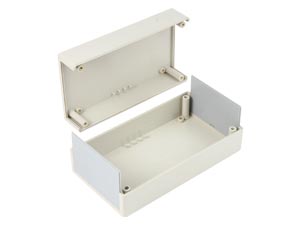