GPIO does not read 3.3 v input with a resistor

I am having some issues trying to read 3.3v directly from the same Raspberry. I tried the next connections:

With the first case, using a direct connection to 3.3 v I did not have a problem. The problem is that if I connect a 1K resistor between the GPIO and the 3.3 v, the GPIO does not detect the signal as a "1".

The rare thing is that yesterday I changed from the GPIO 27 to the GPIO 20, and firstly it worked with that 1K resistor, but today I turned on the Raspberry and it does not work. I thought that I could have broken the GPIO, but it does not make sense because if I make a direct connection with no resistor, it still works.

Some ideas to explain this weird behaviour?

You problem can be explained voltage divider rule. I did the following quick and dirty test to show how the pull up resistor confuses you.

My test is on the I2C SCL pin.

Voltage divider rule says the voltage at the connection point of the two resistors should be:

Google says that some gpio pins have 50k pull up, and some pins no pull up resistor at all, and that at boot time, some pins are pulled up by default, some pulled down. You may like to test other pins.

I guess it is rpi's hidden built in gpio pull resistor that confuses you.

To avoid the tri state input pin floating, you can pull the pull resistor to either Vdd or ground.

Now if you pull the built in 1k8 resistor to ground, and your 1k to 3V3, then because there is a voltage divider which divides the 3V3 at the gpio pin to:

Now gpio pins reads 2v, instead of your expected 3V3.

Anyway, the problem does not go away, but shifted to the other end.

One usual trick is NOT to use your 1K resistor as the input, but use a 'open drain' or 'open collector' device as the input to the GPIO pin. You also need to pull the built in resistor to 3V3. Then all should go well.

I know it is complicated, but that is 'advanced' electronics！

I remember I often read that a weak resistor should be around 100k. So my 1k8 should be WRONG.

Actually I wrote the above in a comment, but found I would not save it because I spent more than 5 minutes editing. I am slow in writing English, so I think I should have edited my comments using an editor and then copy and paste it here as a comment.

I googled again and found someone saying that rpi's i2c pins have 1k8 pull up resistors.

. . . note that they have on-board 1.8KΩ resistors pulling the signals to the 3v3 supply.

About tristate inputs, I googled and found the following comment:

“AVR shared digital/analog inputs are, indeed, "tri-state" of a sort. However, as mentioned, this term most often applies to outputs. The AVR documentation does not use this term with respect to inputs, only outputs.”

I googled again and find the following two notes on i2c pin pull up values.

My quick conclusion is that the pull up resistor should be from 200R min up to 1k8 max.

Now I reading online tutorials on tristate circuits and pull up resistors, to clear my mind and remove my misunderstanding of some confusing technical terms. I found the following two tutorials very good. 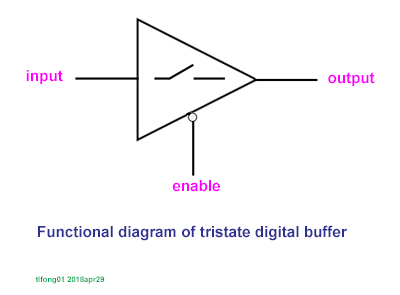 Not the answer you're looking for? Browse other questions tagged rpi.gpio pi-3b+ or ask your own question.

1
Read input from the GPIO
0
Can a raspberry pi accept input data if the input voltage is 42 mv when is required is 3.3v?
3
GPIO High Low not switching in Python
1
Help with connecting NPN proximity sensor to rpi3
5
“Blinking” relay by toggling pins between input and output
0
Why is my Raspbian command prompt grey?
1
Channeling a single circuit into 6 possible circuits based on gpio pin signal
2
Raspberry Pi 3b+ do not detect DS18b20 on 1Wire