Additionally, ACT is flashed in specific patterns (check this if you suspect to have an old firmware) to indicate early boot problems. 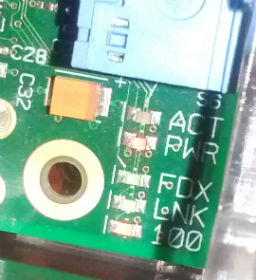 0
Raspberry pi 3 indicates booting, but no USB or HDMI output
73
How do I control the system LEDs using my software?
34
What do the LEDs on the B+ mean?
1
Raspberry Pi 3 Model B+ Stable Red Light When Powered Up
2
Is there a code for the power LED blinking (I've noticed a pattern) or is it simply "blinking" and that's it?
0
Raspberry Pi LED confusion
0
How much force can the ports/ board handle?
1
Act LED flashing 3 times quickly after boot
1
My Raspberry Pi won't boot no matter what I do (It has worked before, nothing is broken)
0
RPi Zero Install
See more linked questions

73
How do I control the system LEDs using my software?
0
Raspberry Pi LED confusion
0
Controlling the on-board FDX and 100Mbit LEDs with a kernel module
2
Driving Bi-Color LEDs
34
What do the LEDs on the B+ mean?
3
Powering several LEDs from GPIO output
0
Are my resistor leds safe
0
Power consumption of APA102C LEDs when turned off? (Pimoroni Blinkt!)