RPi 3B+ Does not boot after first time, not reading SD card (RLED ON, GLED OFF). Works on RPi A+

I've got a problem with my Pi3 B+ not reading my microSD card on boot (Red LED ON, Green LED OFF). The microSD I am using is a SanDisk U1A1-SDSQUAR-016G-GN6MA. I prepped the SD card with NOOBS and fired it up, and everything seemed to be working just fine. Raspian installed seemingly without issue, but when it went to reboot into the OS after install, it just never came back up. I get a solid red LED and no activity on the Green LED. I put the card into an older Pi A+ and it booted into Raspbian with no problems. So the SD card seems okay?

From there I tried a second Pi3 B+ to ensure it wasn't some kind of hardware failure with the first one. For this I did a complete overwrite format of the SD card with SD Card Formatter and then wrote the raspbian image directly to the SD card with Etcher. I wrote the June 27, 2018 image of Raspbian Stretch. On the 2nd Pi3 B+ it came up into raspbian with no issues. I configured some settings like connecting to the network and then rebooted via terminal command "reboot". The Pi shut down and never came back up. No boot, Red LED Solid but no action on the Green LED just like the first one.

Has anyone run into a problem like this before or know where I should check next? I don't understand why it would read the SD card with no problem the first time then have such a problem on reboot. I'm using a 2.0A power supply, which should be adequate to at least boot up [EDIT] I've hooked it to my bench supply now, which can provide 4A, so power is not the issue. Possibly an issue with the SD card? I don't actually see a listing for this specific card at https://elinux.org/RPi_SD_cards

[EDIT] I did some measurement of 5V and 3.3V rails and found that I get 5V (although a little funny looking, see image) and nothing on 3.3V. So not having 3.3V I imagine is a rather large issue. Any idea as to why it would just "go out" on two 3B+ boards after working on first boot?

[EDIT] I measured continuity with my meter, it's reading a short from 3.3V to GND (0.5 Ohms between them measured from the GPIO header). The question remains as to why this would 3.3V suddenly short off a soft reboot?

5V Rail (apologies for the photo rather than a capture, it's an old scope): 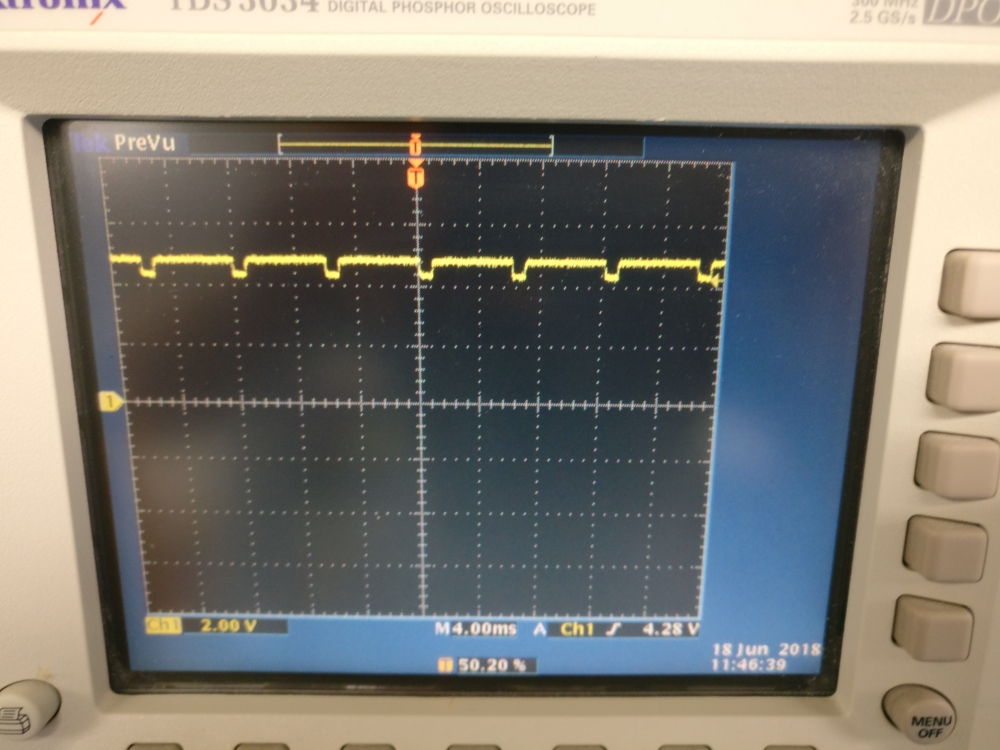 This sounds similar to a problem I am currently having. I found this forum post on Adafruit's website https://forums.adafruit.com/viewtopic.php?f=50&t=138947&p=686882&hilit=Raspberry+Pi+3+will+not+boot+back+up#p686882 . It contains a few helpful troubleshooting techniques on both the asker's and answerer's part, but from what I see the power and the SD card do not seem to be the problem assuming you also used the power supply for the 2nd RPi3. On the post they did not find a solution so they got an exchange. If you purchased your RPi3 from Adafruit I highly suggest posting on their forum as well so their technical support engineers can have a look at your problem.

Do you have another monitor to try the Pi on? Check your cables? Try turning off your power supply after boot then turning back on. Why not try etching raspbian straight to the SD card and booting straight into raspbian to see if the Pi are alive, then run raspi-config and update everything.

Hopefully some of these options work.

I was with the same problem. I fixed it by resoldering the pins of the sd slot. I think it's a ploblem of cold solder. You'll have to touch each pin with the soldering iron for 3 seconds approximately. I hope you can fix it too.

Not the answer you're looking for? Browse other questions tagged pi-3 sd-card raspbian-stretch or ask your own question.

4
SD card doesn't works after dd
0
Corrupted SD Card - RPi does not boot
0
Power on but fail's to boot
4
Raspbian Jessie does not boot after installing a kernel with exported symbols
1
RPI3 does not boot, after which SD card is no longer usable
3
boot failure after flashing RPI-4 raspbian buster on older RPI-3 image sdcards
0
3B+ will boot from USB (microSD to USB adapter) and not from the microSD card itself