I have just started using a servo to drive the front steering of a remote control car frame which i cannibalised. The steering works fine if i start it up and tune it however when i shut down the raspberry pi and then turn it on again the servo goes full blast well out of the range i set up initially (or trys to) and then consequently i think this is causing the internals gears to slip etc because my angles which were set up nicely before are then all wrong again!

Is this something to do witht he raspberry pi's boot method? Is it possible to stop this from happening within the code or will i need to implement some hardware? 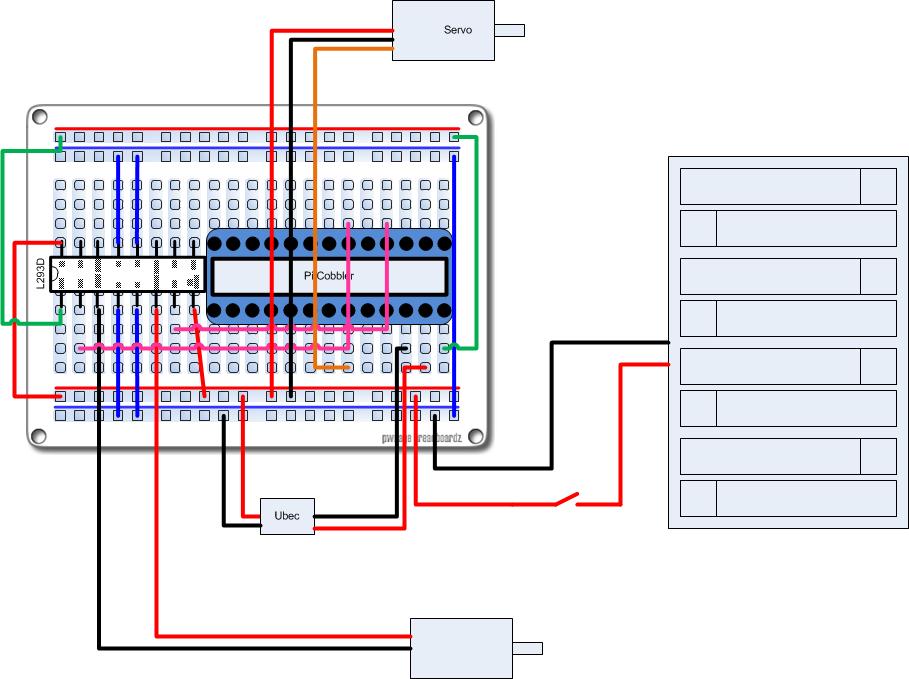 It does seem like the GPIO pins get set during boot. This is quite a problem as it is not what you would have expected! The problem is that during boot the GPIO pins are floating and pulled down by anything. So they will have "random" or unexpected values and voltages.

First of all the servos should NOT be connected directly to the GPIO. You should be using a buffer of some kind!

You only power up the buffer when you are ready! So during boot it can cycle the GPIO as much as it likes but only after you send an I2C command or something to a separate power control circuit will it power up your buffer.

When I say separate circuit - This might even be a small Arduino that triggers a transition to switch the power on the buffer. Using the GPIO pin to control the power will only result in the same problem unfortunately. You can reliably tell if it won't just cycle.

If you insist on using the GPIO pins then you can solve the problem by adding in a resistor of your own that will control the power to the servos. Put a 10kOhm resistor on the listed PINS below - Do not use other PINS as it won't work because they are pulled HIGH at boot whatever you do to them. This will guarantee LOW at boot time and still allow you to use software to pull it HIGH.

Its only purpose is to keep the PIN low when its in the floating state (not initialised by Pi yet) So the Resistor is connected to PIN and GND. Then your device is connected to PIN as normal. So both Resistor and device are connected to the PIN. But only resistor to GND (So it pulls down the PIN on any stray voltage - And you activate it it will go to 3v3 and the resistor will no longer pull it down but your device will sense the change- This does not affect PWM) This pull down can be on your devices side too)

An easy to follow example.(Ignore the part numbers and pretend that is your Pi pin and the thing-a-ma-jig marked as CCR2 is your servo) 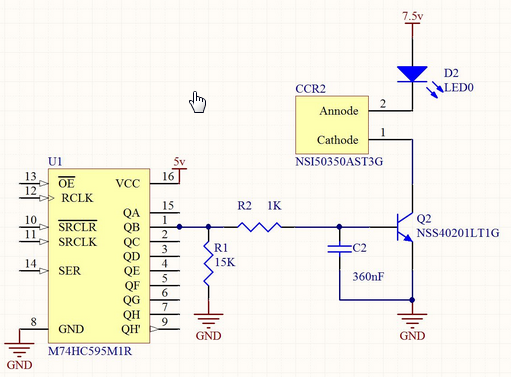 R1 is connected to PIN 1 to pull it down. Pin 1 is also connected to another resistor in series to limit the current for the transistors range. A transistor is a simple gate. If powered on the BASE the gate "connects" COLLECTOR and EMITTER and lets the current flow in the direction of the arrow. In this diagram its a NPN transistor most likely something like a 2N2222 (cheap and cheerful). This is also a very nice way to "BUFFER" your circuits. As you can notice the 7volt supply lights the cathode bulb and goes to GND, without ever reaching your Pi/MCU. The capacitor is not required but it seems to be used here to smooth out (debounce) the switching process) The LED is just coolness.

So your GPIO pins do not drive any heavy loads directly- Doing that can burn out the CHIP or PCB tracks. Instead you supply a voltage with more amps and better copper that will give that burst of energy, while your digital circuit (GPIO and Transistor) control the flow while being protected.

Remember to check if the transistor can handle the load. In most cases if overloaded the transistor will burn out before damaging your digital device.

This resistor is connected to V+ instead of GND and pull the PIN high while floating. This type is not common and only required for specific purposes. 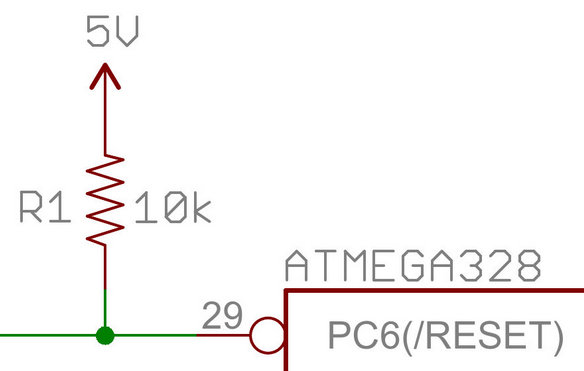 As demonstrated on the Arduino Atmega328. The RESET pin must always be pulled up so that the internal circuit knows it is operating normally. If this pull up drops to the point where the internal circuit thinks its changed from HIGH to LOW (because of battery going flat) that is known as a brown out- and the 328 will reset and behave erratically.

So in this case it is imperative that the RESET pin is always HIGH to indicate normal behaviour.