Rpi3 might have been fried by wrongly connected DHT11 temparature sensor

I just bought a package of sensors online, a few things were really easy to set up, but the DHT11 (3 pin version) temperature and humidity sensor was giving me problems. Here's what I did:

The issue was that I wasn't able to see the text file of the sensor, which is supposed to give me the hexadecimal readouts of each sensor. I could see the filesystems for each sensor, but there wasn't anything with a reading. Small issue, and for some reason I thought it could be because I wasn't connecting the DHT11 properly. I found this post on this forum, and also this link from another site which stated that the 5V pin should be used. I connected the 5V to the sensor while I hadn't put any resistors in the circuit at all. The Pi crashed immediately, but then came back online with a recovery screen, and worked without issues for a while.

I still was having issues with the DHT11 for unrelated reasons (I'm new to the RPi), so I again tried to connect the DHT11 to the 5V pin because I wasn't sure if the RPi crashed the first time because I had inadvertently bumped the power supply input. Even though I didn't have the data pin connected to the Pi, this attempt killed my Pi. The LED light for power is on, and the 5v pin is still sending about 5.3V vs the ground pins, but that's about all the Pi does now.

Does this make sense that I fried my RPi by connecting the wrong voltage to the sensor? In other words, is the sensor module both so sensitive to voltages that the Pi itself can produce, and so integral to the Pi's function that I could kill the Pi (admittedly by being careless) like this? Any documentation I can read to avoid dumb mistakes like this in the future?

Thanks, looking forward to getting a new one! And brushing up on Ohm's law...

Following directions from this site, containing documentation from the supplier I connected the sensor to 3.3V pin and GND, ...

OK, no problem. The Kookye tutorial is good.

The issue was that I wasn't able to see the text file of the sensor. Small issue, ...

You mean you weren't able to find the datasheet? This is a big issue. You should google harder.

Errata 2019apr17hkt0854 - The OP refers to a tutorial which uses a text file to log the readings. I did not read that tutorial and so misunderstood what he said. I do agree that the log text file is irrelevant.

Well, many fake forums give fake advice. I am not surprised that your toy crashed immediately.

Does this make sense that I fried my RPi by connecting the wrong voltage to the sensor?

(1) No, you are not careless. It is one of the common newbie traps, killing Rpi.

(2) It is not a dumb mistake. Not just newbies, even ninjas kill their Rpi this way. The verdict is:

"Putting the Pi down by latching it Up".

(3) Ohm's law isn't enough, you need to know much more than that.

It is a long story that I am going to tell later. First, an illustration. 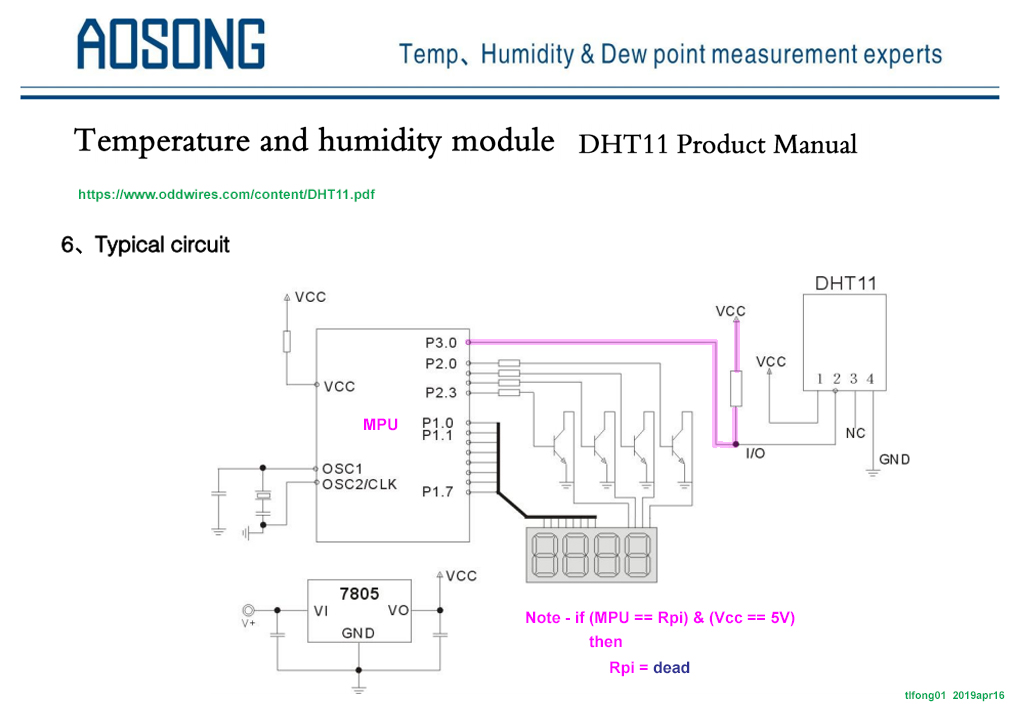 The Dangerous Configuration Causing Latching Up

Newbies usually unintentionally connect a resistor between GPIO and 5V, in many situations include the following.

For an Arduino low trigger 5V relay. Rpi GPIO Low signal can switch on relay, but cannot switch it off, because the relay is designed to switch off when High signal is above 4V, the Arduino standard High. However, Rpi High is only around 3V, therefore not High enough to switch off the relay. In other words, the relay is always on.

The clever newbies have invented many ways to get around the Rpi High not high enough problem.

Both methods might cause latch up. The configuration is illustrated below.

Now, some references on latching up:

In brief, you should never deliberately forward bias those "diodes". Consequently, you can not safely place an external pull-up resistor to 5V on the I/O [GPIO] pin. That would forward bias a parasitic FET and owing to its poor internal impedance to the chip's internal power rail it may overheat, or worse, it may bias up parts of the chip to voltages greater than they can handle.

TL;DR: Do not power the DHT11 with 5V and drive rPI GPIO with 5V: you risk damaging your rPi

The OP did not include the pull-up resistor, which I assume is to ensure that GPIO is driven with 3.3V (NOT 5V):

Joan advised that a pull-up resistor was required in a 5V configuration:

It should be possible to do as follows: Connect Pi 5V to sensor +, Pi ground to sensor ground, and any GPIO to sensor data. You ALSO need to connect a 4k7 (or thereabouts) resistor between the data line and 3V3. In other words leave the data line pull-up connected to 3V3 but power from 5V. I have not tested this but I'm told it will work by those who know more than me.

It is not clear to me that Joan's statement will work nor is it clear if it will damage your raspberry pi. I do not advocate Joan's untested solution, however, if you are brave enough and willing to test this configuration, then by all means post your results whether you are successful or it damages your raspberry pi

Not the answer you're looking for? Browse other questions tagged sensor rip or ask your own question.

24
Do I have to connect a resistor to my DHT22 humidity sensor?
0
ZFM-60 fingerprint reader via GPIO
3
On Raspberry PI, how do I pull down a GPIO pin and then read it immediately after?
1
powering a sensor usin external power
1
Issue with Pi 4 and 1wire
0
Connecting a Sensirion SPS30 PM sensor to RPi