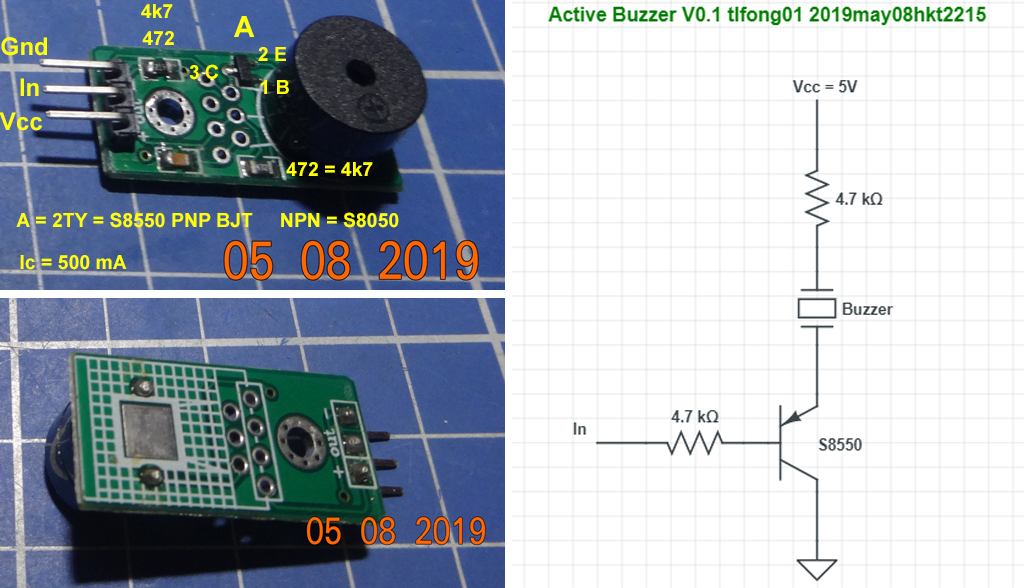 I tried putting a 5100 ohm resister (I didn't have a 4.7k handy) in series with my output pin but my buzzer module would still stay on constantly. After reading about it triggering on a low signal and being for an Arduino, I finally stumbled onto using 3.3V to power the module and setting the control pin output to LOW to turn it on and HIGH to turn it off. It worked in a simple on/off program but later I had to add GPIO.setup(12, OUT, initial=GPIO.HIGH) to keep it from turning on at the start of a more complex program. HTH

Python, just in case. With gpiozero lib you can use close() to stop it

0
How can Rpi python control a 5V relay module, opto-isolated, with a JDVcc jumper?
1
Command/control latching relay using gpio pin only
1
How to stop LEDs blinking when button is pressed
0
Is it fine to power a buzzer that requires only 3V using the 3V3 pin of the Raspberry Pi 3 B+
0
Piezo Buzzer Driven By Rpi GPIO Problem

2
PIGPIO stream pwm data over websockets with nodejs. GPIO
1
Using INT interrupt line on PCF8574 I2C 8-bit IO-expander on Bit-banged RPi GPIO?
2
Can GPIO mode be changed at once for more than one pin?
0
Can't set GPIO to LOW/HIGH PySerial
0
GPIO pins on a RPI3 on Arch
1
Can I connect 3V3 to GPIO output pin?
0
pigpio library serial_wave confusion