How to toggle button on and off with gpiozero?

I can't seem to find a solution of doing this using gpiozero. I've done it using rpi.gpio with add_event_detect and call back to change state but I was under the impression gpiozero is much simpler.

In other words, python can toggle a LED, but never a button, because only a human can change the status of a button: being pressed, being released. I know it is confusing. Perhaps a picture helps. 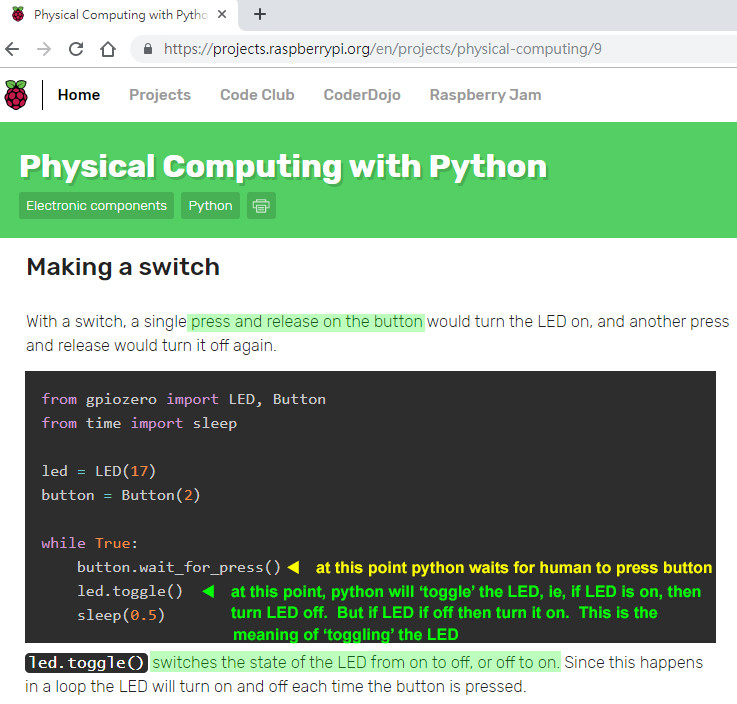 The picture below tells (1) how to toggle LED, and (2) how to read button.

"Turn on an LED when a Button is pressed:

There is a toggle function in GPIO zero. So if you want a single LED on pin 26 to change state every time a button on pin 5 is pressed:

(The sleep is needed, otherwise it changes state while you're pressing the button, and all you get is a strobing LED when you push the button)

4
Multiple Callbacks from GPIO interrupt
6
Debouncing buttons with RPi.GPIO -- too many events detected?
0
Physical Computing - making a switch
1
Raspberry Pi 3B+ RTC and Power ON button
1
Bluetooth camera button key input data with Python Pynput?
1
While loop picking up button press twice with gpiozero
2
How do I incorporate a button for pedestrian crossing when making traffic lights?