I wrote a script using GPIO pins and I'm fairly certain there was no way for it to cause a short circuit. I ran the script, and was unable to stop it using ctrl+c, so I pulled the plug on the Pi and when I tried plugging it back in, all I got was a solid red light. The ethernet lights are also not on when I have an ethernet cable plugged in. I've tried recovering the SD card by reformatting it and reinstalling the saved disk image, and also tried putting a blank copy of NOOBS on it, but it still isn't working. I used a voltmeter to test the GPIO pins, and the 5V is working. The 3v3 doesn't seem to be working, however...

Any thoughts? Do I just need to get a new Pi? I just got this a few weeks ago and would hate to have to redo everything.

No script can damage the Pi (although it can corrupt the OS - as can pulling the plug).

NOTE poking a voltmeter at the header pins is a BAD idea. Even it the Pi wasn't dead, a momentary short between the 3.3V & 5V pins (which are adjacent) is invariably fatal.

I wrote a script using GPIO pins and I'm fairly certain there was no way for it to cause a short circuit.

Well, if you are connecting a GPIO pin to any pin of a 5V powered device, then there is risk of frying the Rpi or shortening it life。 You might like to read the following posts for more details.

Appendix A - Warning on dangerous pulling up GPIO pin to 5V 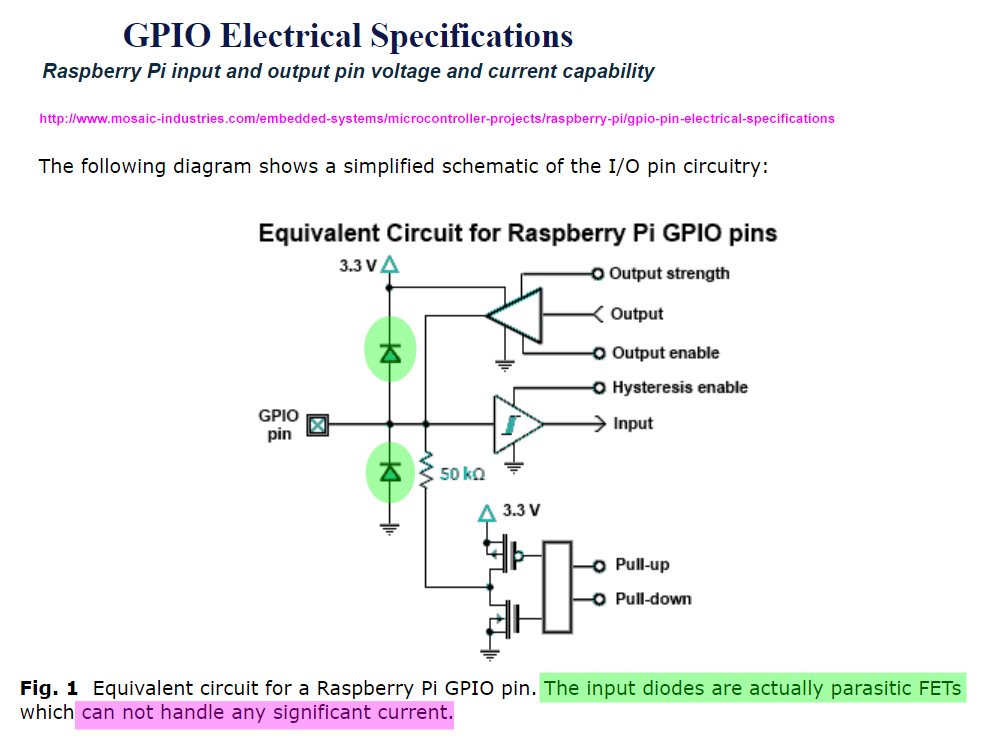 In brief, you should never deliberately forward bias those "diodes".

Consequently, you can not safely place an external pull-up resistor to 5V on the I/O pin. That would forward bias a parasitic FET and owing to its poor internal impedance to the chip's internal power rail it may overheat, or worse, it may bias up parts of the chip to voltages greater than they can handle.

1
Why does screen go blank while wifi data is being transmitted?
0
I think I fried my RPi
1
raspberry pi with 4x20 lcd and pi4j; display something
1
Raspberry Pi 3 B+ won't boot up after 1 week of use