Why Raspberry Pi Zero W is missing to log data constantly every second?

I'm doing a project where I want to record IMU (Inertial Measurement Unit) readings. I want to use pretty high sampling frequency and I'm using Raspberry Pi Zero W to send PWM signal of 800Hz to control the sampling frequency. The Raspberry is connected to the sensor via SPI and logs data to SD card. First I thought that the data logging works just fine but I noticed that something doesn't add up. For example, I know that an event that I'm recording lasts quite accurately 4.5 seconds. However, the IMU readings suggest that the event lasts only 4.2 seconds. Thus, I'm missing some data. I added a time stamp every time when I collect data using Raspberry's clock_gettime -function. The time stamp revealed that about every second there is something happening, which messes up the data logging (figures below). I tried with different sampling frequencies (200-800Hz) but the same thing happened. I connected the Raspberry's PWM pin straight to a pin, which detects when the data is ready to be transferred (so I removed the sensor out of the circuit). Still about every second I miss some PWM signals. Then I generated a square signal from signal generator to ensure that the problem is not in the PWM signal that the Raspberry is generating. It is not.

So I'm asking if there is some background program running in Raspberry Pi that causes the delay or if somebody know why this is happening?

I attached a code and some plots about the time differences between samples with couple different sampling frequencies. 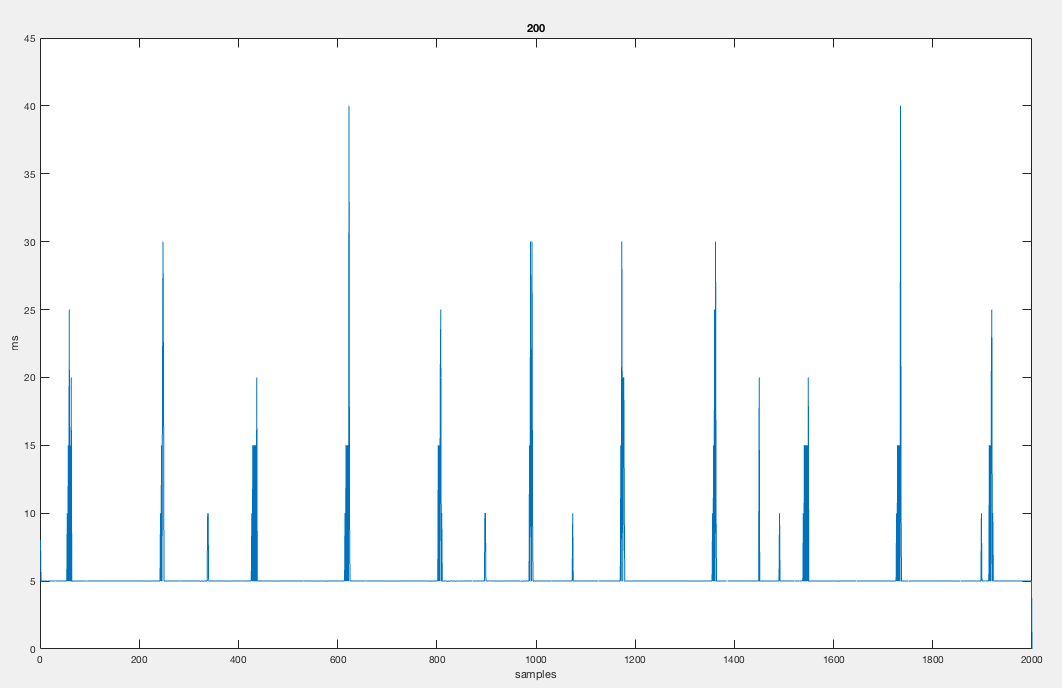 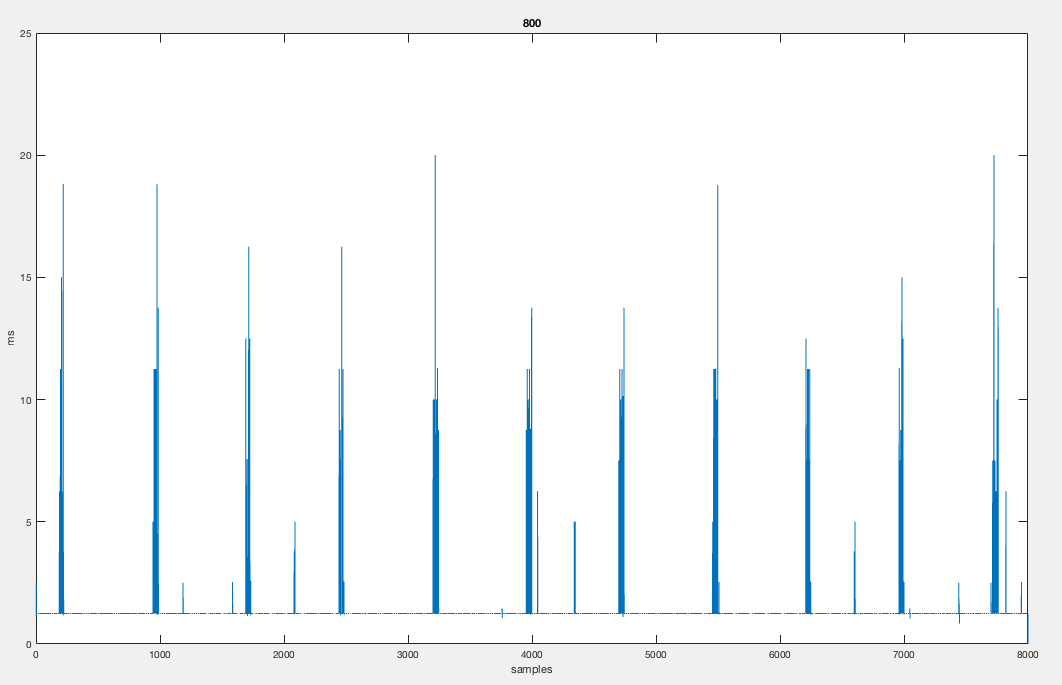 Well, Rpi is not a MCU like Arduino which you can program it to do one and only one thing, say, in your case, generating PWM signals, and almost nothing else.

On the other hand, Rpi linux is kind of UNIX operating system, which is a multitasking/multiprocessing operating system, doing many jobs/processes/tasks in the foreground and background, like entertaining peripherals (input/out things for keyboard and mouse etc), memory (RAM/Flash) management process/task/job scheduling.

In other words, your PWM program get interrupted from time to time (in your case, about once per second) when the linux guy diverts to do its more important jobs, and pauses (preempts) the your less important PWM job.

The trouble/problem is that the little user application program guy almost cannot do any thing to pause the big housekeeping linux guy.

A get around is instead of RpiZ raspbian, use MCU like arduino/ESP8266/CircuitPython, which serves only one master, your PWM program, and almost nothing else.

I am not surprised that you find my explanation confusing. You might like to read the following Wikipedia article abstract to see why I am confusing you.

Multiprocessing is the use of two or more central processing units (CPUs) within a single computer system. The term also refers to the ability of a system to support more than one processor or the ability to allocate tasks between them. There are many variations on this basic theme, and the definition of multiprocessing can vary with context, mostly as a function of how CPUs are defined ...

A multiprocessor is a computer system having two or more processing units (multiple processors) each sharing main memory and peripherals, in order to simultaneously process programs. A 2009 textbook defined multiprocessor system similarly, but noting that the processors may share "some or all of the system’s memory and I/O facilities"; it also gave tightly coupled system as a synonymous term.

At the operating system level, multiprocessing is sometimes used to refer to the execution of multiple concurrent processes in a system, with each process running on a separate CPU or core, as opposed to a single process at any one instant.

When used with this definition, multiprocessing is sometimes contrasted with multitasking, which may use just a single processor but switch it in time slices between tasks (ie a time-sharing system).

They Don't Get the Publicity

Because MCUs contain only 8-, 16- or 32-bit CPUs and cost just a few dollars or even less than one dollar, they do not get the mainstream attention as do the latest 64-bit chips in a PC or graphics card, which cost several hundred dollars. MCUs also do not require the state-of-the-art chip technology.

However, MCUs are everywhere, and billions of these "computers on a chip" are embedded in products from toys to appliances to just about anything. New cars can employ a couple hundred of them. For example, an entire MCU might be dedicated to a simple task such as waiting for the driver to close the car door or press a particular button on the dashboard. See embedded system and automotive systems.

Introduced in 1978, the 6801 was one of the first semiconductor products to claim the "computer on a chip" moniker. These magnified images show the entire chip (top), about three quarters of the 256 bytes of RAM (left) and only a few bytes at 400x.

They Don't Get Much Smaller

These 8-bit PIC brand microcontrollers from Microchip are used in myriad applications, cost less than 50 cents each and are much more powerful than the 6801. We're not great technology predictors. In 1949, Popular Mechanics speculated that future computers would only weigh "one and a half tons!"

A Microcontroller Behind Everything

Today's cars can have more than a hundred MCUs, each one controlling the simplest function from pressing a button to more complicated systems like the ones in the Honda above. 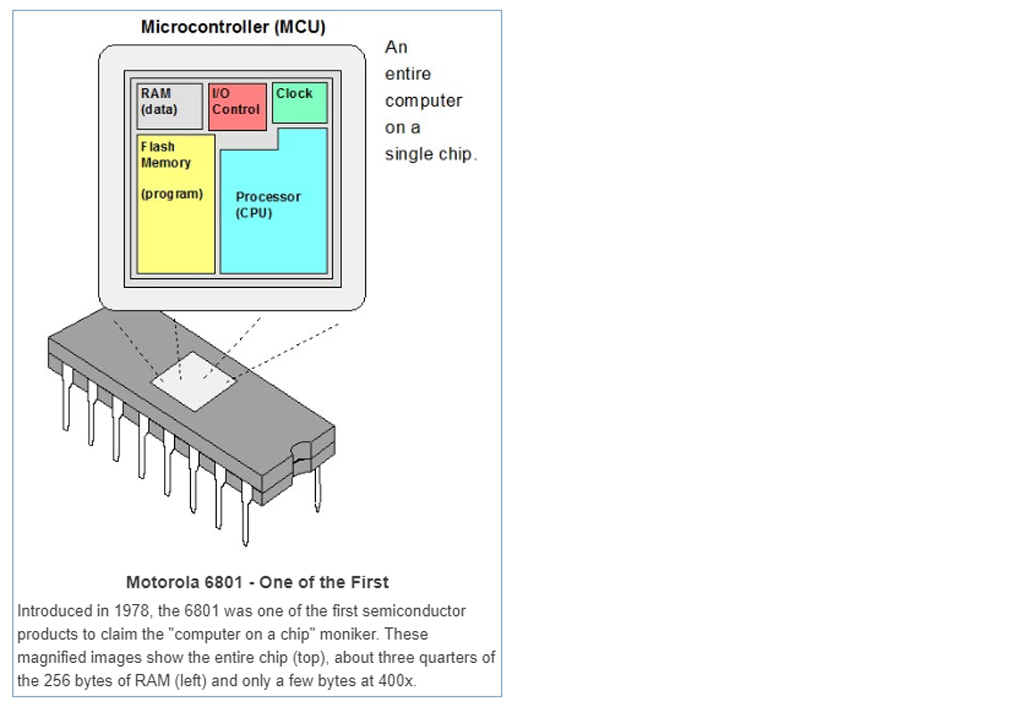 Unlike a desktop personal computer, single board computers often do not rely on expansion slots for peripheral functions or expansion. Single board computers have been built using a wide range of microprocessors. Simple designs, such as those built by computer hobbyists, often use static RAM and low-cost 8- or 16-bit processors. Other types, such as blade servers, would perform similar to a server computer, only in a more compact format.

Single board computers were made possible by increasing density of integrated circuits. A single-board configuration reduces a system's overall cost, by reducing the number of circuit boards required, and by eliminating connectors and bus driver circuits that would otherwise be used. By putting all the functions on one board, a smaller overall system can be obtained, for example, as in notebook computers. Connectors are a frequent source of reliability problems, so a single-board system eliminates these problems.

Single board computers are most commonly used in industrial situations where they are used in rackmount format for process control or embedded within other devices to provide control and interfacing. Because of the very high levels of integration, reduced component counts and reduced connector counts, SBCs are often smaller, lighter, more power efficient and more reliable than comparable multi-board computers.

Not the answer you're looking for? Browse other questions tagged sd-card sensor pi-zero-w spi data-transfer or ask your own question.