I'm trying to save video from my picam and it ends up like this: 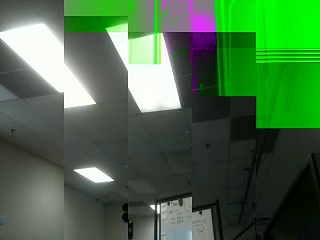 The vertical bands are 128px wide. This holds true under every camera resolution I tried. The green corruption looks the same in every video I saved that had the same resolution.

I tried rebooting the pi and unplugging and replugging the camera ribbon. The camera feed looks fine in preview or when I view the camera stream with opencv. Raspistill also works fine. It's only a problem when I save the video and try to reopen it.

Update: I got a new pi camera (v2) and the corruption is still there

Update2: I've replaced the camera module, the sd card, and even got a new Pi 4 and the problem is still there. It also shows up using raspivid (tested with this command):

It seems like my Raspbian Buster image was corrupted or something.I kept refreshing my sd cards from the raspbian buster image that I had downloaded from the official raspberry site. This time I downloaded a new RB image from the site and the problem went away.

Not the answer you're looking for? Browse other questions tagged python picamera or ask your own question.