I just updated my code to use pigpio instead of RPi.GPIO, the later is working but my robot is trembling like a chihuahua, so I gave pigpio a try.

and the result would be applied here:

now after update to pigio the same angle doesn't move the servo at all, but I did notice that with big numbers like 100 or 150 it does move (not in the correct angle), with 200 or 10 it doesn't (I couldn't understand why, the documentation says that 0-255 should work):

After reading the documentation I'm even more confused, I can't see any units or formula to get angles to work with it (I'm new to this so maybe it is just my ignorance), googling didn't help at all, just found this link with a formula but in it the answer assumes that I know the pulse width of an specific angle (and I have no clue, my previous code were happy with simple numbers)

How can I convert angles into something that pigpio can understand?

Why aren't angles the basic unit for this kind of things? (I'm assuming that angles is way less accurate or something like that?)

You probably ought to be using the set_servo_pulsewidth method.

Servos are not controlled by PWM dutycycle, that is a misunderstanding of how servos work. It just so happens that for one particular frequency you need a particular dutycycle to send a particular pulse width. Forget PWM and dutycycles.

For most hobby servos the following applies.

A pulse width of 1500 µs moves the horn to the centre position.

An increase in pulse width of 10 µs moves the horn 1 degree clockwise.

An decrease in pulse width of 10 µs moves the horn 1 degree counterclockwise.

Each servo is slightly different so check your servos.

WARNING: check your servos. Sending pulses outside the range they expect can destroy them.

the answer that joan gave does give an approximation of where the angles are, but the more you go from centre the less accurate it is, at the end to get a perfect relation between the exact angle and the exact equivalent in pulse width I used a simple rule of 3: 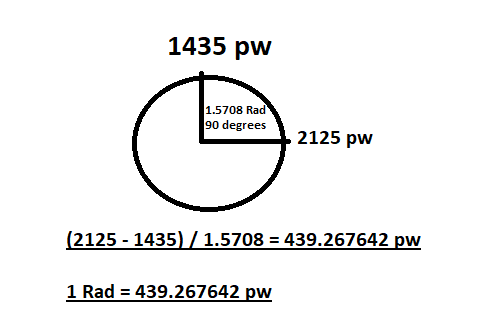 Not the answer you're looking for? Browse other questions tagged gpio python pigpio servo or ask your own question.

1
How can Rpi move a Servo motor using a GPIO pin in PWM mode?

3
How to use pigpio to control a servo motor with a keyboard?
1
pigpio servo control
0
Pigpio With Pi 3 Controlling Two Servos
0
The servo keeps rotating forever
0
MPU 6050 Accelorometer Gyroscope code is giving me an angle of 75 degrees when it's suppose to be 90 degrees
2
Why is pigpio library not moving my servo when the same pin number works perfectly with RPi.GPIO?
0
Get servo position using pigpio
0
Pigpio servo and step motor control