I want to get Analog Audio Input using a PCM1802 ADC Module and MAX4466 microphone module using python. It is actually a project for a very basic and introductory course about Arduino and AVR assembly and as the last part, it wants us to completely figure out how Raspberry Pi works! (I know it may sound very weird that an Arduino course with AVR assembly has a Raspberry Pi Python project!)

Connecting the 3.3,5 and GND are pretty obvious, but for the other ones, I read the PCM1802 IC datasheet that is used in the module, And I found out that:

And DOUT is simply serial output.

As I said, the course was about Arduino and I am completely new to Raspberry Pi. I want to know how I should connect these pins to Raspberry Pi pins and what setting (Setups) should I do in Python for them to work properly? I searched the Internet for some tutorials and I just found some about MCP3008. Unfortunately it just has one clock pins but this PCM1802 ADC has three clocks and some other things and I don't know how should I connect and setup them.

You can see the pictures of ADC module and MAX4466 microphone module below:

I am a PCM1802 24-bit ADC newbie, never used it before. It is a complicated device and its operation needs a long explanation. For now, I am only trying to give quick and dirty short answers to the OP's couple of questions. I hope to give longer answers later.

All newbies wishing to fully understand the answers given here, are expected to spend hours, yes, hours, not minutes, to google, wiki, to read and digest the references and particularly the appendices below:

Ah, you can use Rpi GPIO pins to do configuration and control, as summarized below:

PS - I forgot to point out two things:

(1) MCP3008 uses SPI interface, and the clock you see is the SPI Clock. PCM1802, on the other hand, does NOT use any serial interface, therefore has no SPI clock, but instead uses three control clocks summarized below.

(2) If Rpi working as a DSP (Digital Signal Processor) uses GPIO signals as clocks to control the output timing (time multiplexing the left and right audio output in a serial signal) of PCM1802 which works as a slave. Rpi GPIO signals are also used to configure the PCM1802 operation mode and data formats. But you can also by hand, short the little soldering pads on the module to do permanent configuration.

(3) How to do the hardware and software wiring and setup?

So I will use two power supplies, 3V3 for digital logic, 5V0 for analog.

I just discovered that the module does not have a system clock. So I need to search my junk box for a crystal clock. And before that I need to calculate the frequency which is 256x, 384x, or 768x of sampling frequency. But I don't know what should be the sampling frequency to start testing, perhaps the smaller frequency the better. Anyway, I read the datasheet and found the following:

I searched my jun box and found two clock modules 10.24MHz and 32.768MHz which should be good, according to the following table:

That is the system clock detection circuit when PCM1802 is in slave mode should find the clocks are for fs ~= 44.1kHz sampling frequency for 256*fs and 768*fs. I guess PCM1802 should be forgiving enough to tolerate 1~2 MHz deviation in the 10MHz to 33MHz range. I found AliExpress selling crystal oscillator modules at exactly 33.8688MHz (Ref 11). But I think my not so exact frequency module should work OK.

I think it should be easy to use Rpi to control output, with the three clock signals, plus the PWDN signal to start and stop ADC operation. Configuration can be set using the on board pins connected to Vcc or ground for master/slave mode, OSR oversampling rate, BYPAS by pass, data format etc. If everything goes smoothly, we can use a scope to display the serial signal time multiplexing left and right 24 bits digital data.

But I think it would be a bit difficult to use Rpi to "split" the serial signal into left and right, and then perhaps use ADC to convert back the left and right digital signal into analog and input to an power amp and speaker to verify that ADC and DAC performance is good. A more ambitious project is to transmit this serial digital signal using a serial interface, UART or Bluetooth, 433MHz or 2.4GHz, before doing the ADC.

I am too lazy to use Rpi to do this further testing. So I think perhaps I just use a stereo ADC module to do the second part of testing. The block diagram of the module is shown below. The ADC module is available from AliExpress (Ref 14) 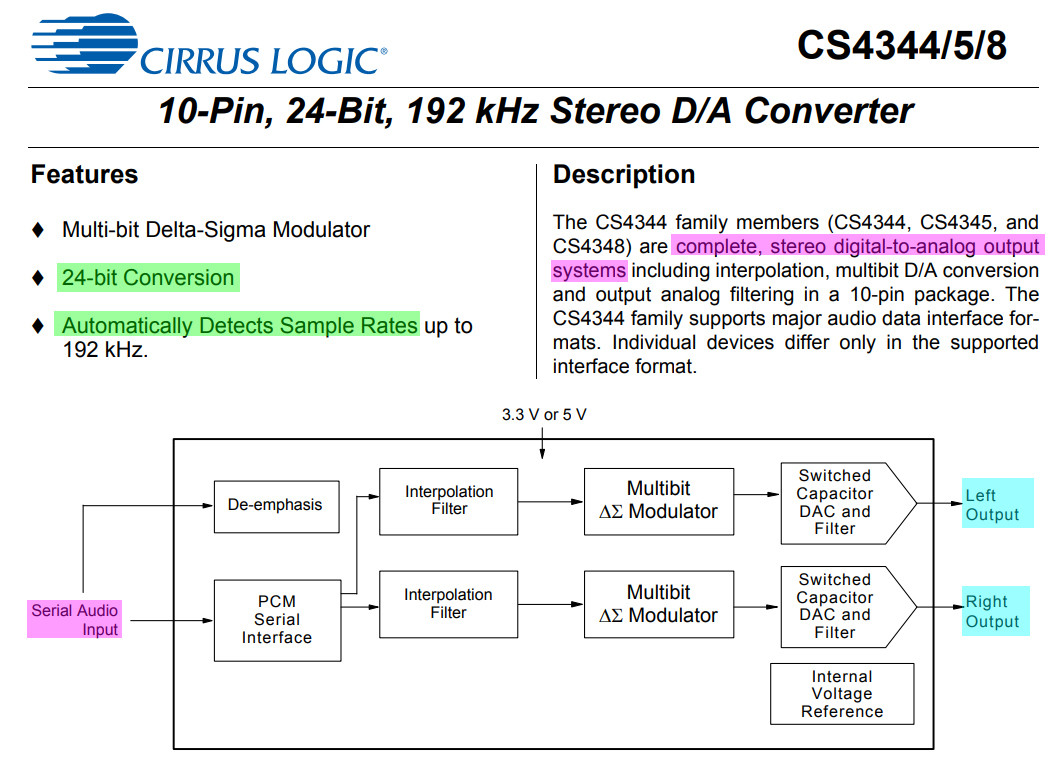 In the last year I read a couple post on audio ADC conversion and streaming using MCP3008, which I think is not a good choice because of low resolution and low sampling rate, not to mention of difficulty of handling stereo signals. I think it is much better to use cheap PCM1802 ADC adn CD4344 DAC modules.

Now I am reading the PCM1802 datasheet the second time, to make another configuration summary for python GPIO initialization. In short I will be using 6 GPIO pins, 3 clock pins, 1 power up/down, and 2 master/slave mode pins, as summarized below. 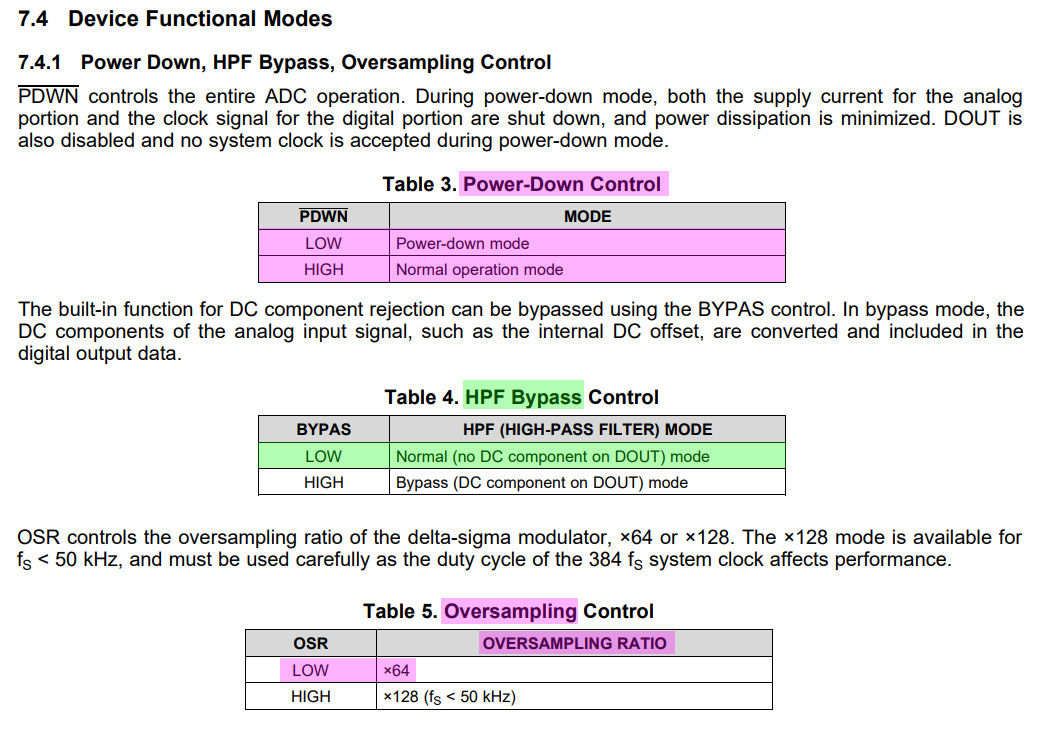 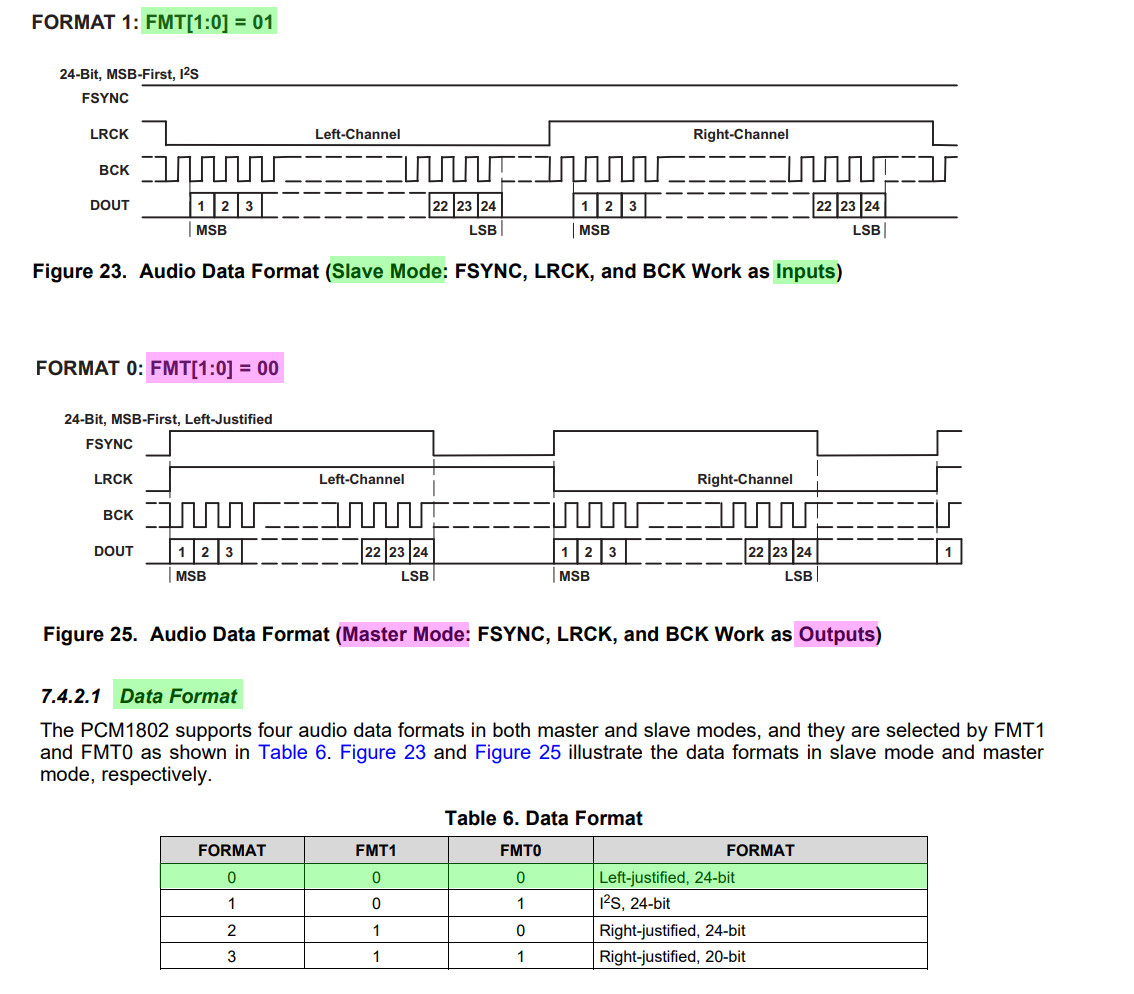 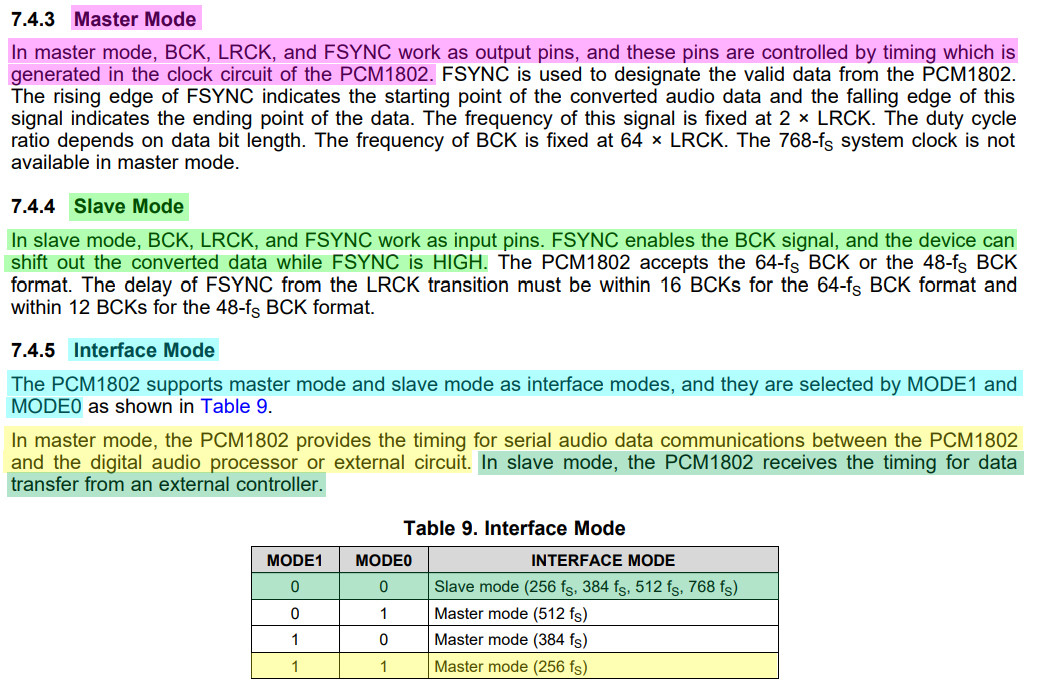 There are two questions: 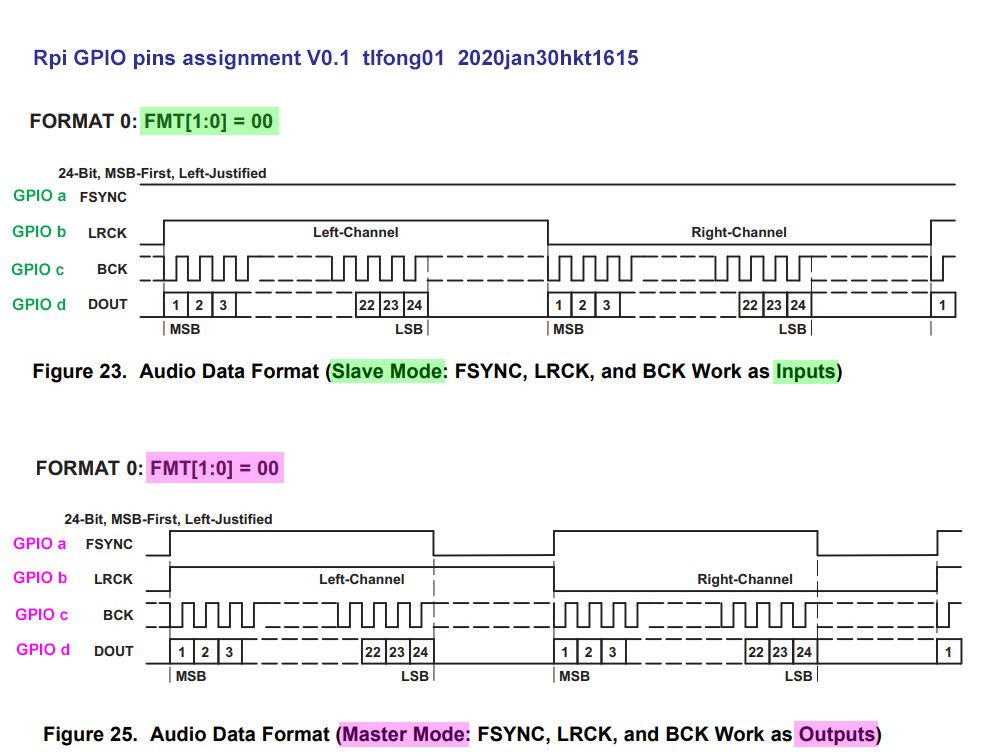 Now I need to do calculation of the system clock, sampling rates, and most importantly BCK, bit clock which I am a bit confused if it is automatically generated by PCM1802, and NOT provided by a Rpi GPIO clock pin (GPIO04, GPCLK0).

I first checked out if the 10.24MHz crystal oscillator I found in the junk box is still working. It does, but over/undershoots by 2V, and also ringing. I guess it still works. But I need to check out if PCM1802 need a 3V3 clock or not. 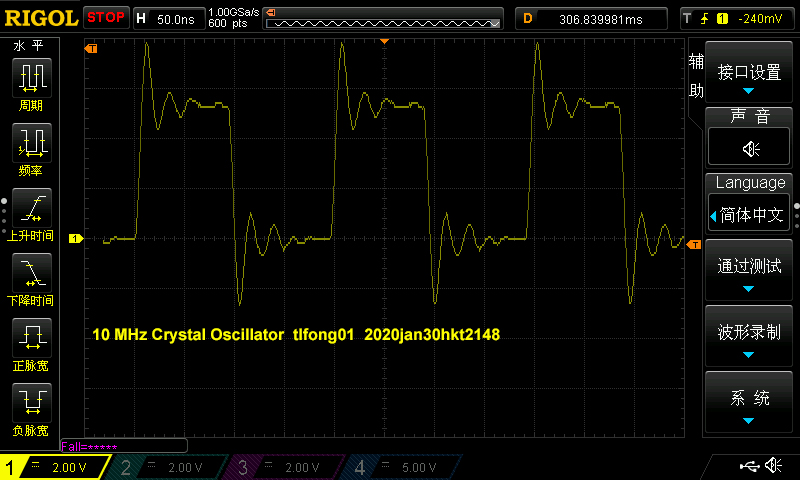 I read the datasheet and was happy to find that the absolute maximum of system clock SCKI is 6.5V, so I don't need to do any level shifting or use Vcc = 3V3.

Perhaps the OP should do the dirty and messy calculation work for me!

I worried that the crystal oscillation output might be a bit too dirty for PCM1802. So I searched my junk box for another module to verify and cross calibrate. I was happy to find that both modules look identical. So I can now sleep well and move on to perhaps drawing a schematic and start PCM1802 Rpi4B buster (release 2019sep26) Thonny Python 3.7.3 programming. 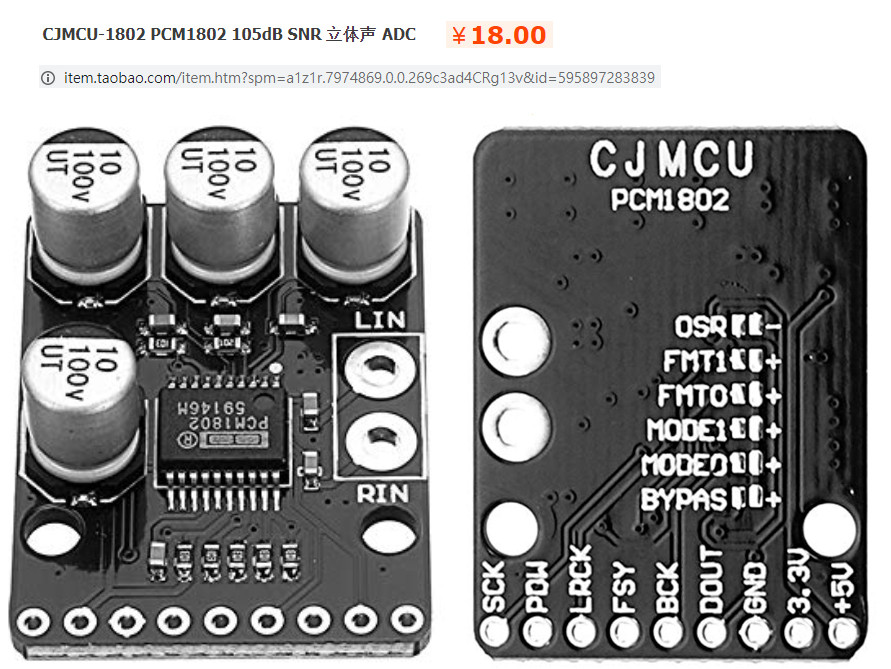 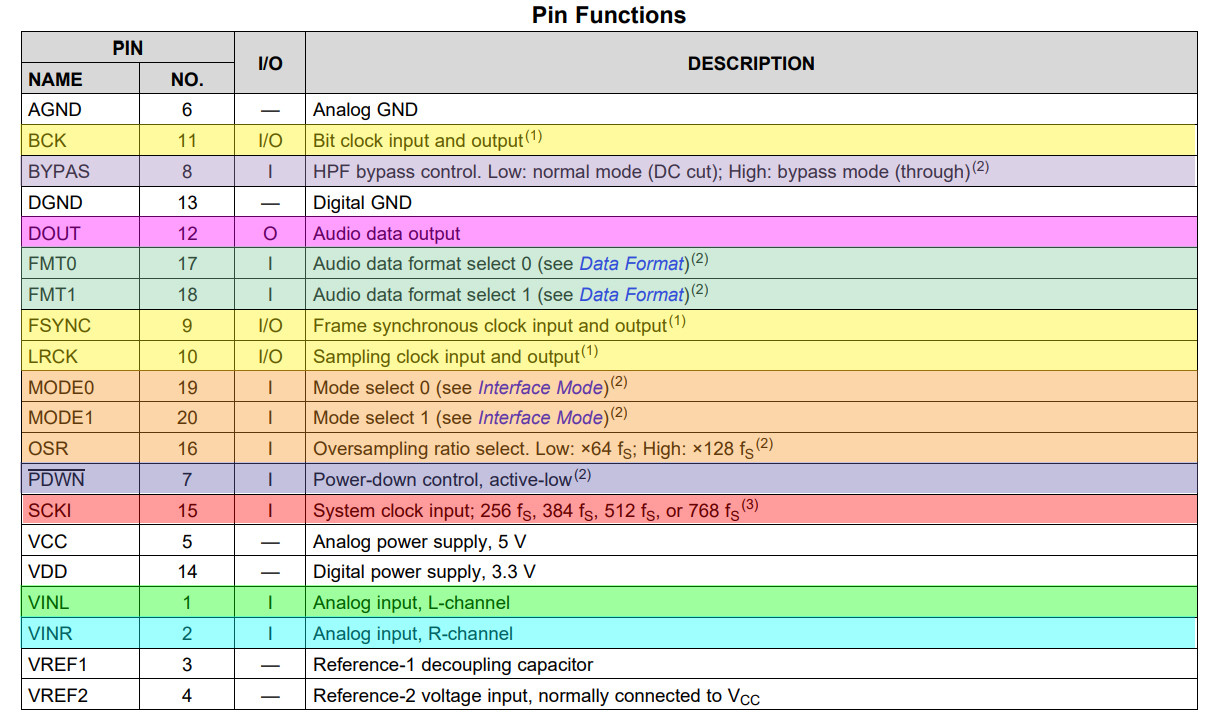 7.3.1 Hardware Control The FMT0, FMT1, OSR, BYPASS, MD0, and MD1 pins allow the device to be controlled by tying these pins to GPIO and GND or VDD from a host IC. These controls allow full configuration of the PCM1802.

PDWN controls the entire ADC operation. During power-down mode, both the supply current for the analog portion and the clock signal for the digital portion are shut down, and power dissipation is minimized. DOUT is also disabled and no system clock is accepted during power-down mode.

BYPAS - the built-in function for DC component rejection can be bypassed using the BYPAS control. In bypass mode, the DC components of the analog input signal, such as the internal DC offset, are converted and included in the digital output data.

OSR controls the oversampling ratio of the delta-sigma modulator, ×64 or ×128.

7.4.2.1 Data Format The PCM1802 supports four audio data formats in both master and slave modes, and they are selected by FMT1 and FMT0.

In master mode, BCK, LRCK, and FSYNC work as output pins, and these pins are controlled by timing which is generated in the clock circuit of the PCM1802. FSYNC is used to designate the valid data from the PCM1802.

7.4.5 Interface Mode The PCM1802 supports master mode and slave mode as interface modes, and they are selected by MODE1 and MODE0 as shown in Table 9.

The FMT, MODE, OSR, and BYPASS control pins are controlled by tying up to VDD, down to GND, or driven with GPIO from the DSP or audio processor.

I mixed up PCM1802 with the less powerful PCM1808 (without the FSYNC signal pin) in the discussion and references. My apologies. 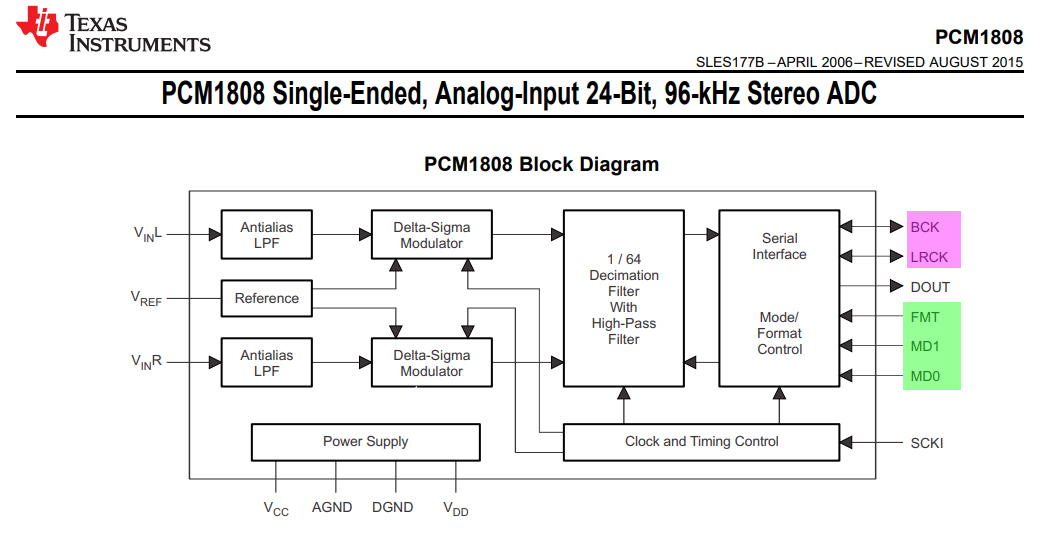 Not the answer you're looking for? Browse other questions tagged pi-3 python audio analog-to-digital microphone or ask your own question.

4
What hardware peripherals might be capable of reading 6.144, or better yet, 9.216 megabits/second?
2
Reducing sound noise when recording with Pi
2
How to record system audio on Raspberry pi?
2
Detecting a musical tune to actuate a servo
2
Interfacing non bluetooth speaker with Raspberry Pi 3
1
speaker and mic with Raspberry pi 4
0
How can I send input from my laptop mic to raspberry pi?
1
How to increase sampling rate of Raspberry Pi to 10Msps using external ADC or Microcontroller
0
Cannot increase gain on USB Microphone
1
How to use Rpi [python] to read [SPI MCP3008] ADC of a [water] tank level sensor?
See more linked questions