Running a freshly installed Raspberry Pi OS Desktop on a Raspberry Pi 4, I'm trying to install software using the graphical Add/Remove Software tool. For example, Visual Studio Code. After checking the tick near the code entry, I clicked OK. A popup appears that additional confirmations are needed because other software has to be changed: 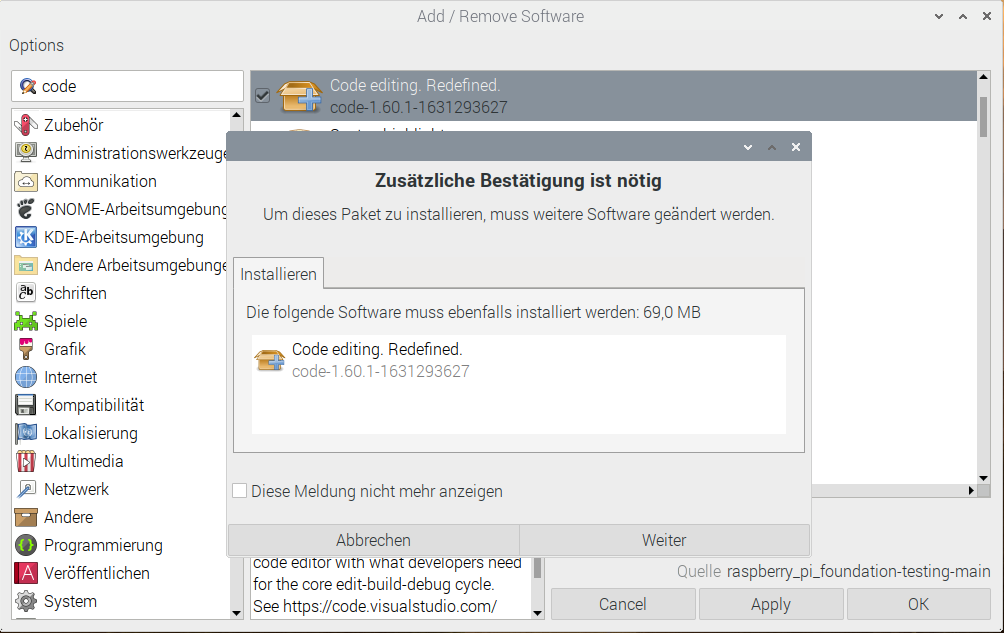 I confirmed with Weiter (which means continue) but nothing happens. The list appears again and it seems that nothing is working on installing the software, there is no CPU/Network/IO usage. 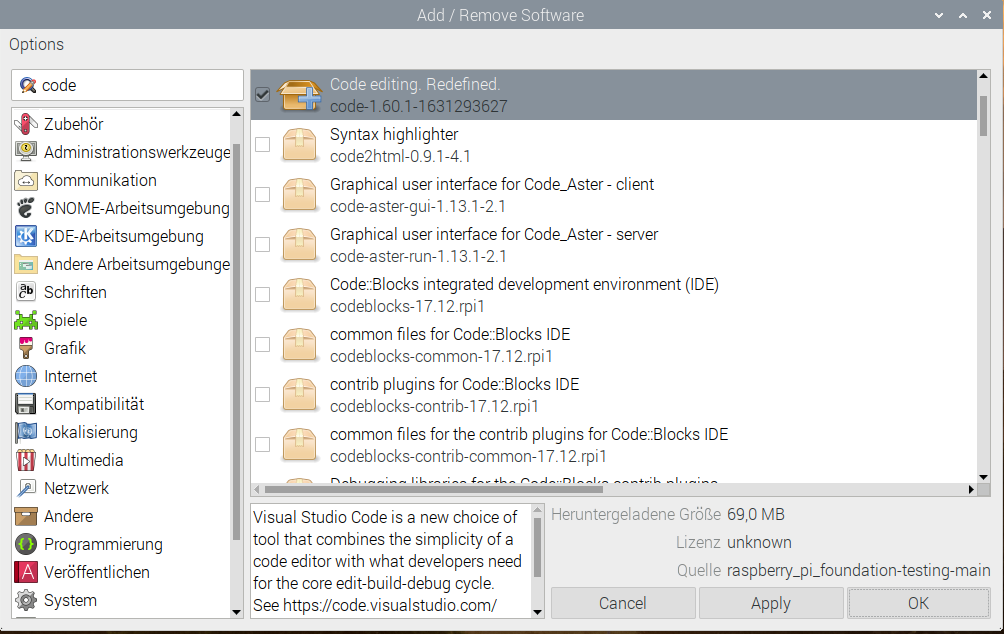 This doesn't change after waiting for a few minutes. The code command is also still not avaliable.

Using sudo apt install code on the commandline works, about a minute later VS Code is avaliable using the code binary as well as in the application menu of the pixel desktop:

The same happens on other packages like vim: The GUI doesn't do anything, installing using the terminal works perfectly. I tried to run the Add/Remove software gui using the pi-packages command from the terminal, in hope to get some information, but I only get the following lines immediately after startup (without doing anything in the UI):

I found this thread and changed the locales back to en_GB.UTF-8 (since they were German). After the reboot, the behaviour is still the same.

Why is the GUI not working? What's the problem?

I found the -v switch and after clicking continue, it gave me the following entry

This seems strange, I never got an authentication popup - also not behind the window. I tried to allow sudo without password in visudo with the line

I found out that this issue is limited to remote sessions, like done with xrdp. When using a screen with keyboard/mouse physically connected to the PI, it shows a authentication dialog. After providing my password, the installation was started.

We're curretly investigating this in a GitHub issue. As workaround, you can access your Pi physically if the GUI is a requirement for you, or alternatively use the commandline with the known commands like apt install.

Not the answer you're looking for? Browse other questions tagged software-installation apt pixel or ask your own question.

3
how to create a restore point before an apt-get install to effectively remove the package
1
Pixel Add/Remove Software not working
7
Why can't I install Postgresql-10? (how does the raspbian archive work)
0
What's the easiest way to get Raspbian with GUI, without software
1
Can't Install Packages with apt-get | no installation candidate
0
can't update to python 3,5 although we have install it with the command below
1
Malformed entry 1 in list file /etc/apt/sources.list.d/brave-browser-release-.list (Component)
2
Sort or more filter options on Add/Remove Software?