What's wrong with this Pi?

I'm going to return and exchange this Raspberry Pi 2, but wanted to know if anyone has seen these errors before: I have one RPi2 (out of 13 I use for my after-school program) which acts up during boot, often giving this output (looks like a kernel panic): 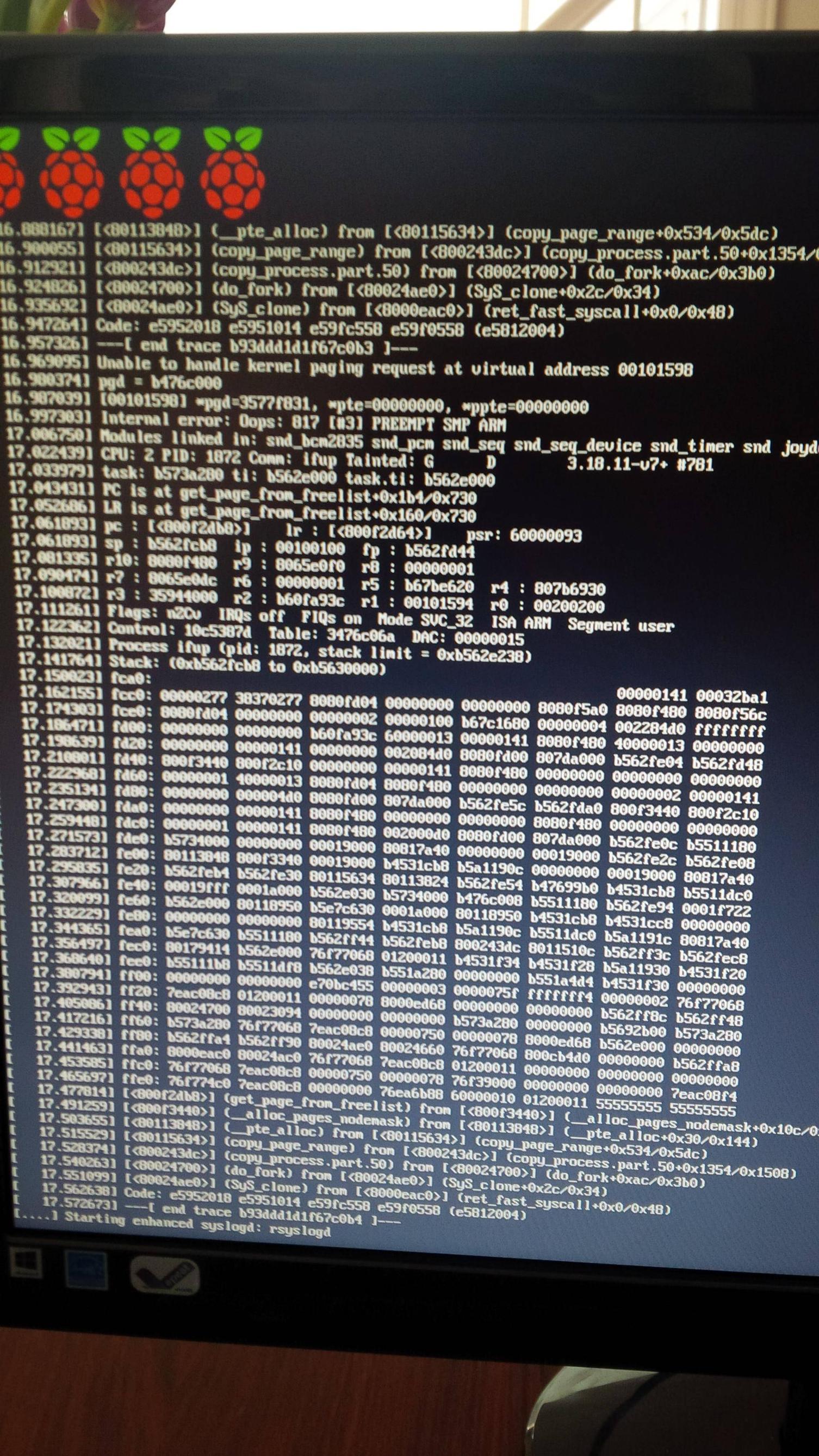 Sometimes it does not give this kernel panic, but instead gives garbled display output, like in the below image (note - the image looks like it is out of focus, but that's actually the video output from the RPi - it seems to superimpose text output with a slight horizontal offset). Note the green lines on the right side: 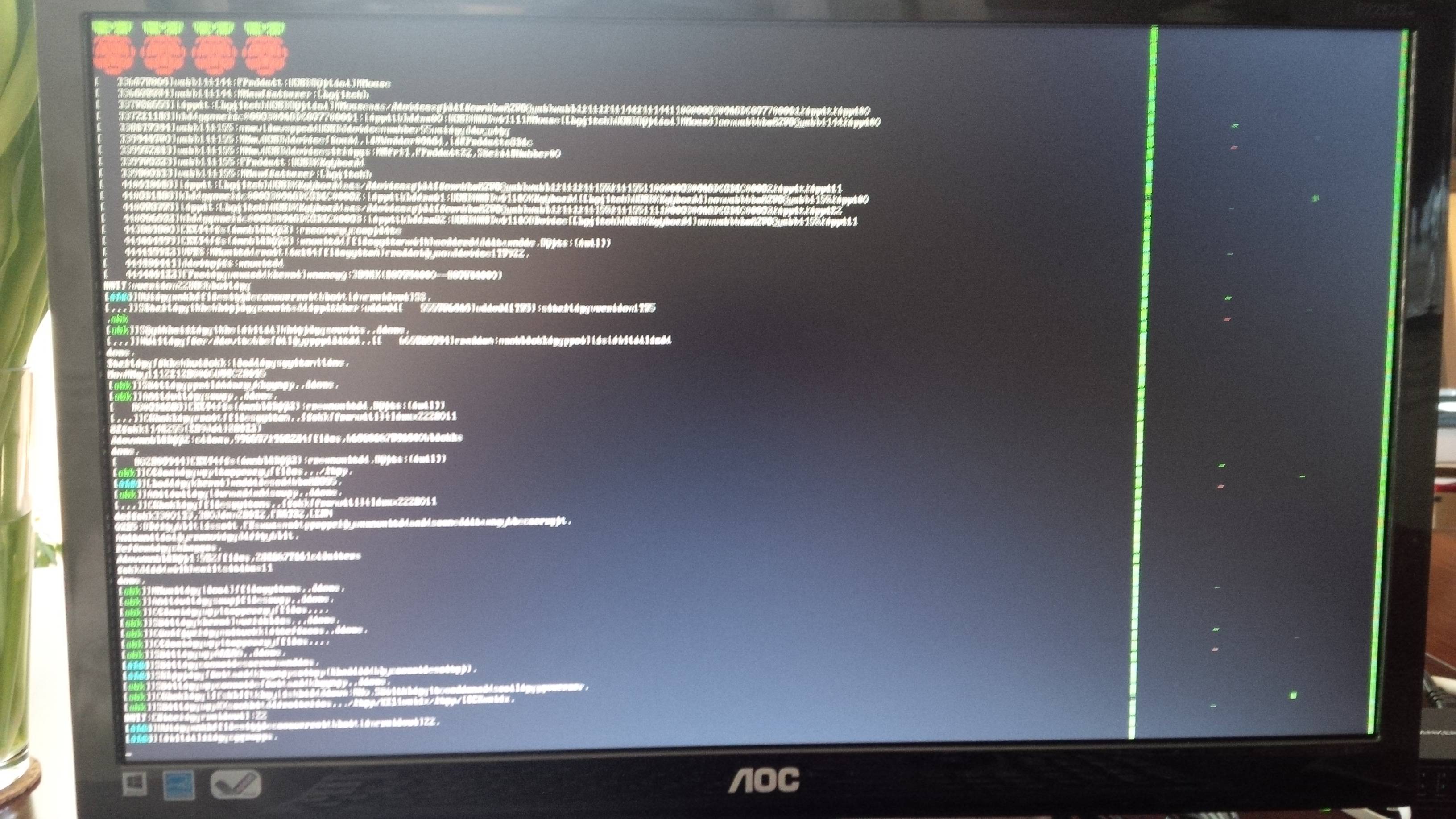 On other occasions (typically the first boot after being switched off for a while) it seemingly boots into X, but never renders graphical output - my monitor suddenly says "No Input" and only the red light on the RPi is on. Anyone seen this before, or have an idea of what is happening here? My best bet is that the VideoCore IV GPU has an error.

PS: I'm booting Raspbian Wheezy, but get the same issue when booting a fresh Raspbian Jessie. I have tried several different SD cards, all of which boot fine on my other RPis.

UPDATE: Ran the faulty RPi using Jessie in a different setup and managed to get into the desktop. Then ran it back in my original setup (still with Jessie) and also got into desktop, repeatedly. Booting into my trusted Wheezy image (tried and true for hundreds of boots on all my other RPi's): ERROR. Put Jessie back in, boots. Only difference I can notice is that this RPi has a small label "Made in P.R.C." on it, whereas most of my other RPi's (haven't checked all of them yet) are "Made in U.K.". Is there perhaps a firmware difference?

Only difference I can notice is that this RPi has a small label "Made in P.R.C."

You will probably find this article interesting. In relation to that, my Pi 2, made under license by RS Components (one of two official distributors, the other is Element 14/Farnell) has some of the characteristics of the P.R.C. made board pictured there (namely the HDMI jack), and a similar PCB, but the RS box does say "Made in the U.K.". The RAM is dated 1447 (week 47, 2014).

If the explanation here is bad RAM (that would be my bet), where/when the board was made is probably not super relevant; it happens to every system in time. However, it might be worth noting the rumor in that article that some of the (earlier?) RAM "needed an update to the firmware to work". So you might compare those dates (it's on the bottom Elpida labelled chip). Your first error screen does look like a memory error.1

In any case, if you have the latest firmware and kernel installed, I'd call it a defect. If not, since you've said it is the difference between a wheezy and jessie image, compare the firmware files and kernel version and try updating the wheezy firmware and kernel (with rpi-update) to see if that corrects the problem.

Finally, there is apparently a way to do a memtest on the Pi -- since this runs in userspace it cannot prove the memory isn't defective, but it could prove that it is. You should try this with the memory split set as low as possible for the GPU (see footnote).

1. Which tends to cause mysterious problems that are not always the same...the fact that the GPU shares the RAM using an arbitrary split might explain that crazy blurred screen.

Almost certainly bad RAM. My Model A had the same fault until I reworked its soldering on the input connector and then it worked fine. Evidently RAM was "power sensitive" and brownout caused single bit errors.

Not the answer you're looking for? Browse other questions tagged boot video pi-2 or ask your own question.

2
Raspberry Pi; blank desktop
1
DPKG failing with fail2ban
2
Is a red LED turn off during boot of RPi 3 a sign of problems?
1
Kali linux won't boot on Raspberry Pi 3B+