Is it possible to run the raspbian based Kano OS in QEMU?

Kano is a real, real cool device for kids.

I wonder if I can run Kano OS in an emulator like qemu. I'd really like to check it out before buying it. After all Kano OS is just a Raspbian based OS which runs on a Raspberry Pi 2 normally as far as I understand.

I followed the various tutorials on how to run it under qemu (I use ubuntu) and use this command:

The Kanux-Beta-v2.2.0-jessie-release.img is downloaded from the Kano Website (Download the image directly link), the kernel-qemu-4.1.7-jessie from the other "raspbian on qemu" tutorial.

But I always end up with a kernel panic right after booting: 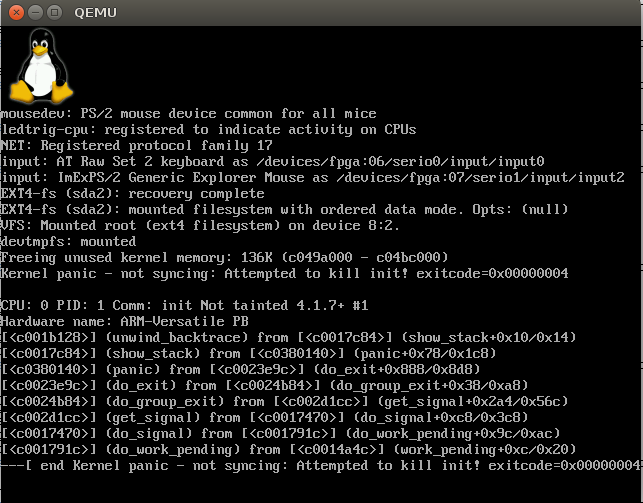 After searching the web, I suppose the error is maybe because kernel and img do not fit each other. If so, where get the right kernel from?

And anyway, has anybody run Kano OS in an emulator? Is it possible?

Yes and no. It is not possible to run the official kano IMG in Qemu but you can run Raspbian and add the kano repositories to the sources.list file.

Install Raspbian Jessie on Qemu (This is for windows, just remove the .exe and stuff): Do this

Run this to get the gpg:

You won't get the 'white rabbit' setup or anything, but on the next reboot, you will very likely get a kano desktop!

Not the answer you're looking for? Browse other questions tagged raspbian kernel qemu or ask your own question.