I've a Pi camera v2 which I'm planning to use with an RPi3 for a computer vision project.

I need to capture full sensor images from the camera - no cropping. The resolution actually used by the software is very low, around 120 x 90 or so (plus or minus a few dozen). The software will acquire a frame, process it, acquire next frame, etc - as fast as possible. The software will be written in Python, with Tensorflow doing image recognition.

Is there a way to do deep binning on the camera directly? I'm trying to avoid image processing in software as much as possible, since all 4 CPU cores will be busy doing other things. So I need to downsample from the full sensor images to the low 120 x 90 resolution with minimal CPU effort. It would be great if the camera could do some really deep binning, like 20 x 20 or so.

If not, what would be a good option in terms of Python libraries to do fast, deep downsampling? BTW, I can't drop pixels, I need all the initial information, so some kind of blending would have to be done.

The software only processes black and white images. Can I set the camera to output b/w images? Again, if not, what would be the fastest way to do that in Python on the RPi3 platform? Any hardware acceleration tricks are very welcome.

The overall goal here is to come up with image acquisition routines that use the whole sensor, downsample, and feed approx 120 x 90 px images, black and white, 8 bit per pixel, probably as a numpy array, to the computer vision part of the software, while using the minimum amount of CPU cycles, in order to maximize the overall speed.

Let's start by looking at the camera modules themselves. The v1 camera module is capable of 2x2 and 4x4 binning (see the camera modes table); I've heard there's an 8x8 binning mode as well but the firmware devs weren't able to get it working. This is why the v1 module can achieve full field of view (FoV) in most modes.

The v2 camera module by comparison, unfortunately, is only capable of 2x2 binning which explains why many of its modes have a partial FoV (I think the v2 module can also do line skipping, but I don't think that's used by the Pi's camera firmware). However, this isn't the whole story. This is only the beginning of the image processing pipeline. In other words, this is just what the sensor itself passes to the ISP block in the GPU which handles the rest of the processing, including any resizing. Whilst the camera has several discrete modes (listed in that table), it can effectively work in any resolution up to the listed maximum. If you read a bit further on from those tables in the documentation, you'll find a description of the heuristic used to select the sensor mode according to the requested resolution and frame-rate.

Provided you either wind up in, or force the use of, a full-frame sensor mode you'll be capturing from all pixels on the sensor anyway. As for concerns about CPU usage: don't worry. The CPU isn't used for any part of the camera's imaging pipeline, it's almost entirely GPU based (except for that first binning step which is done by the sensor ISP). The only time the CPU gets involved is when it receives the final output and has to do something with it.

If you're looking for minimal CPU usage, this is a major plus of the camera module compared to USB webcams which, because the USB bus is polled by the CPU, use significant CPU time (USB3 uses interrupts instead of polling but we're talking about Pis here which only have USB2, and besides: most USB webcams don't use USB3 at the time of writing).

Onto your specific requirements. You want:

Easy enough. We'll use sensor mode 4 which provides full field of view and uses the sensor to perform an initial 2x2 binning. We'll set the output resolution of the camera to 120x90 (this simply means the GPU's resizing block will take the full-frame 2x2 binned sensor data and downsize it down to 120x90). Finally, we'll capture straight into a numpy array but we'll only make it large enough for the Y (luminance) plane of the data; it'll throw an error because the array's not large enough for all the data, but that's okay - we can ignore that and it'll still write the Y data out:

This is more or less copied straight from the Unencoded image capture (YUV) recipe which also explains why we're actually capturing 128x96 here (the camera works in 32x16 blocks).

What about rapid continual capture? I'm assuming you're interested in this simply because you want this as fast as possible (which generally means you want as many as possible as well). In this case it's best to use a custom output with a YUV recording (which will receive one write() call per frame), then use numpy's very handy frombuffer method to layer a numpy array on top of the front of the captured data (note: this is extremely fast because we're not allocating the numpy array or copying the data, we're just saying "make a numpy array on this existing block of memory"):

Despite producing 40 frames per second of image data in numpy arrays, the CPU usage of this script is minimal. Comment out the print statement, which is actually quite CPU heavy, to see the overall CPU usage: it's about 2% on my Pi3 so there's plenty left over for whatever image processing you want to do.

Pi camera v2 is a particularily bad choice for what you're trying to do. Take a look at its supported resolutions list: 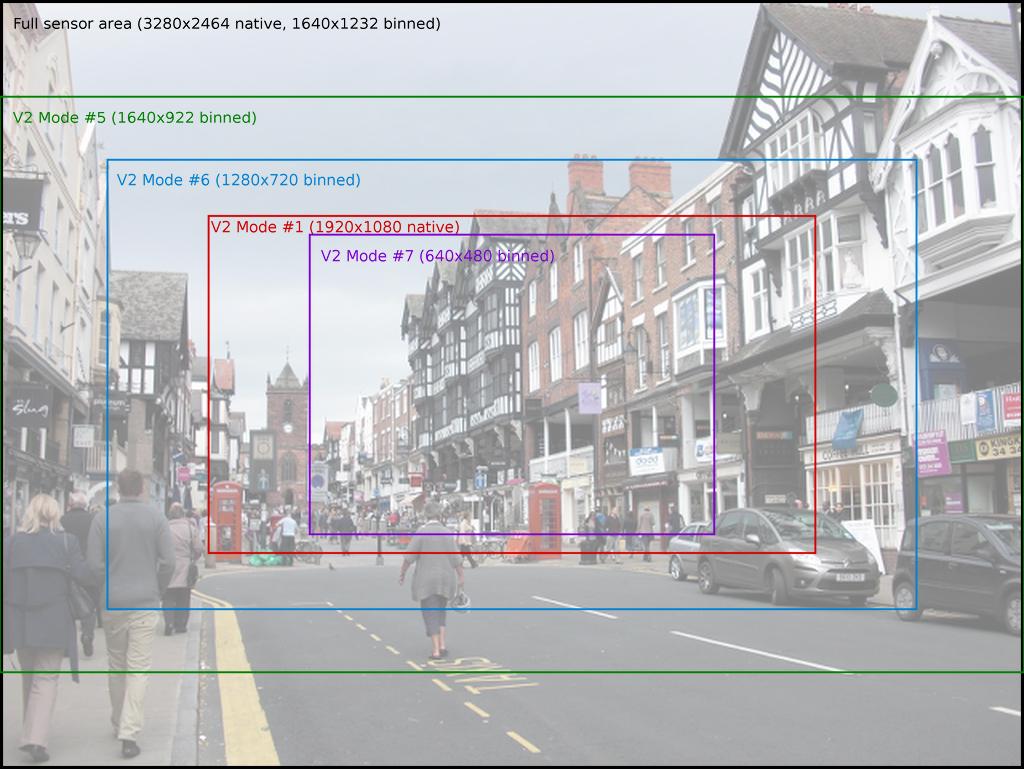 As you can see, the smallest supported resolution is 640×480, and it's already cropped compared to full sensor area.

There's Orange Pi camera you might take into consideration, which has similar size and supports resolutions down to 320×240. Not exactly what you need (albeit closer), but I don't know if you're able to switch your project to a different SBC easily.

My advice however would be to buy a cheap USB webcam which supports CIF resolutions, expecially SQCIF (128×96). You can find out which resolution a webcam supports by running v4l2-ctl --list-formats-ext.

1
Picamera capture to array is slow